Is Straight Talk good enough to quit Verizon? Can Straight Talk really offer the same service at half the cost of a traditional Verizon plan? After using both services, we share this Verizon vs Straight Talk comparison to help you decide which carrier to use with coverage, pricing, and other important details, as well as who shouldn’t use Straight Talk to replace Verizon.

The biggest reason we see people look to Straight Talk instead of Verizon is the cost of service, but there are similar plans and there are definitely benefits to choosing Verizon over Straight Talk for some customers. We’ve added in new Verizon pre-paid options that include a new $30 plan and a new $40 plan that offer a lot of value and for some users will completely change the winner of this comparison.

In this Verizon vs Straight Talk comparison, we will look at how these two companies compare for a single user and or a family with two or more users or a user with multiple devices like an iPhone and an iPad with LTE.

In early 2018 Verizon added two new pre-paid plans including a $30 a month 500MB plan and a $40 a month for 3GB. Both plans come with unlimited U.S. talk and text, plus carryover data for one month when you pay on time. These also include mobile hotspot support. 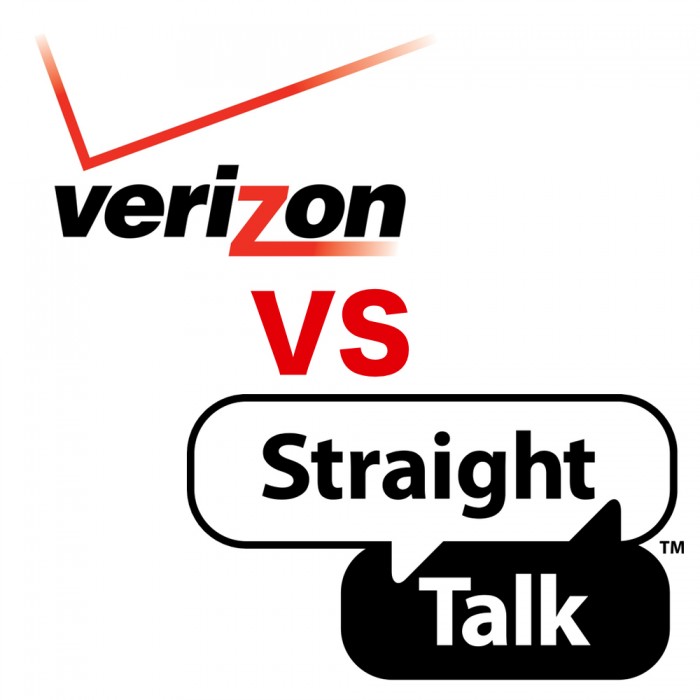 Verizon vs Straight Talk: What you need to know

If paying for a phone off contract is too expensive, you can bring your own phone from many carriers to Straight Talk and a used Verizon phone to Verizon. Both companies also offer payment plans for phones with $0 down and multiple payment lengths and fees, but there is a huge catch to the payment plans that Straight Talk offers.

Read the rest of our Verizon vs Straight Talk comparison to find out which carrier is best for you and what you need to know about each option before signing up.

Verizon coverage and Straight Talk coverage are nearly identical if you are able to bring your old Verizon phone. If you are using an AT&T phone you connect to those towers, which are also very good.

Although Straight Talk doesn’t spell out exactly which towers you use, your experience may be better or worse depending on the carrier you bring your phone from. Sprint and T-Mobile coverage options are still lagging in some areas in 2017.

The coverage is very similar on Verizon and Straight Talk.

If you are buying the Straight Talk phone in a store, you may be able to tell by the color of the coverage map. A red map is Verizon and a blue map is AT&T. Keep in mind that this may change as packaging changes. Right now the best way to know for sure that you are on a Verizon network while using Straight Talk is to bring your own Verizon phone to the carrier.

Verizon and Straight Talk both offer 4G LTE speeds that allow you to connect at the fastest current levels, but once you go over 2-10GB of data on Straight Talk the “unlimited” plan slows your speed to a paltry 64kbps that Straight Talk warns may, “impact the functionality of some data applications, such as streaming audio or video or web browsing.”

While you are in an area of good coverage with 4G LTE, you can expect to see speeds similar to the comparison above that covers the biggest carriers in the country. Straight Talk uses a variety of carriers for coverage.

The biggest reason many users want to switch from Verizon to Straight Talk is to save money, but not everyone saves with a prepaid plan from Straight Talk. If you are a single user with one device, Straight Talk is a good option if you need a lot of data, but Verizon’s prepaid plans may offer a better value if you want to use a hotspot.

If you are a family or a user with multiple devices you should look closer to make sure that you are getting the best deal. If 5GB isn’t enough Straight Talk offers a 10GB high-speed data plan for $45 a month. Verizon pre-paid plans also offer 7 GB for $50 or 10 GB for $60 a month options.

Comparing Straight Talk and Verizon plans and prices. These do not include the cost of a phone. As of January 2017.

Two important things to take away from the comparison above are the features that you don’t get with some plans and the savings for users that happen when you end up with a family of four.

On Straight Talk and on some of the single line Verizon Wireless plans there is no personal hotspot, so you cannot use the phone to connect a computer or a tablet to the Internet. This is included in the cost of the Verizon Plan, which also includes Verizon NFL Mobile at no added fee. If you go with the pre-paid Verizon plans you get a hotspot. For value users the Verizon pre-paid plan for $40 a month with 3GB of data is a better value than Straight Talk’s $35 a month plan.

Straight Talk is still a good deal with two people in a family, but once you get up to four users the savings tip back in the favor of the Verizon plan.

Straight Talk doesn’t offer an overage option to get more than 10GB of high-speed data. On the single line plans from Verizon, the overage is $15 for 1GB. You can opt for a Verizon Unlimited plan, but there are speed limits on that personal hotspot at the $80 a month option and video quality restrictions.

Gone are the days of giving up a good phone if you want to use a pre-paid service like Straight Talk. Verizon and Straight Talk both offer some of the best smartphones you can buy from iPhone to the Samsung Galaxy smartphones and more.

You won’t see new devices like the rumored Galaxy S8 or iPhone 8 on Straight Talk as fast as on Verizon, but you can typically buy off contract or unlocked and bring to Straight Talk using the option where you just buy a SIM card for $9.99. If you want the Straight Talk iPhone 7, you can buy it direct with monthly payments or you can bring your own.

Here is a listing of some of the phones you can get on both carriers. If you want more storage on the iPhone and other phones, you will need to go with Verizon or bring your own phone

You will not find the newest LG or Motorola phones on the Straight Talk website, but you can still buy them used and use them on Straight Talk. 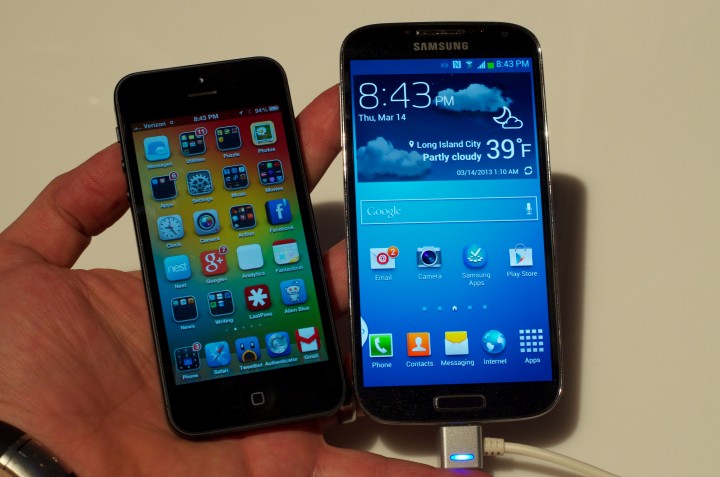 There are good phones on both carriers, but Verizon gets some new phones faster.

Customer Service is a huge part of your experience with a carrier and it is an area where Verizon is hands down the winner in this comparison. 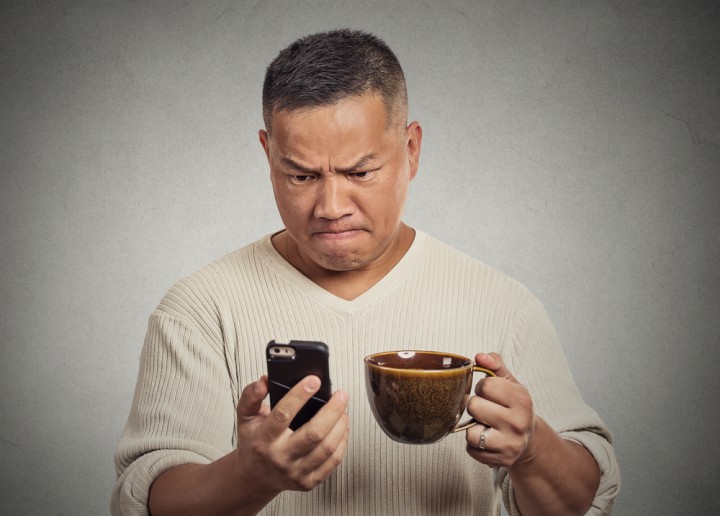 When I have a problem with Verizon I can reach out for support on Twitter, call a customer service agent who understands the problem even if it doesn’t fit a script or walk into a local store for help. When I go to a store they will even explain how things work on a new phone, without asking me to pay for help.

When I ran into problems with Straight Talk I ended up speaking to someone in a call center who I had trouble understanding, who couldn’t help with an issue outside o the basic script and kept asking me about Tracfone instead of Straight Talk. My cousin went months without data after his Straight Talk settings were messed up and support could not help him before we discovered the right settings on an online forum. In short, be prepared to wait longer for help and to do more DIY customer support than if you use Verizon.

Which is Best for You?

The Verizon vs Straight Talk comparison is about much more than just price and coverage, but it is a good place to start. For single users, Straight Talk offers an affordable option without a contract or a payment plan for the phone with the same Verizon coverage in many cases. Verizon’s pre-paid plans offer a lot of value, especially the $40 a month 3GB plan that includes unlimited text, voice and hotspot use. There are still savings to be had with two lines, but once you approach a family of four, the Verizon plan is a better option and includes more features.

Verizon offers a wider selection of great phones, and the Verizon Edge plan is worth considering for many users. The Straight Talk Smart Pay Plan is not worth using if your goal is to save money.

In our experience, Verizon is a clear winner when it comes to support and customer service as well. With all of these factors in mind, you can figure out if you should go with Verizon or Straight Talk. On Verizon, you can also add an iPad or another tablet for $10 a month with many plans. Straight Talk allows tablets, but you need to buy a separate data plan.