Apple’s released a new version of iOS 14 and iOS 14.0.1 is a point upgrade that alleviates some of the initial issues with the company’s operating system.

iOS 14.0.1 is a maintenance upgrade which means it’s much smaller than the first version of iOS 14 (iOS 14.0). Like all point upgrades, it brings under-the-hood improvements to the iPhone.

With that in mind, we want to take you through everything there is to know about Apple’s latest software update for the iPhone and iOS 14.

In this guide to iOS 14.0.1 we’ll take you through the update’s performance, the current list of iOS 14.0.1 problems, the best places to find feedback about bugs and performance issues, the iOS 14.0.1 jailbreak status, and more.

We’ll start with our impressions of iOS 14.0.1 update’s performance on iPhone.

If your iPhone is currently running iOS 14.0, you’ll encounter a rather small download.

For iOS 14.0 users, the iOS 14.0.1 update will be over 100MB, probably around 170MB. The exact download size will vary based on your device and the version of iOS your device is currently on.

If your phone is currently running an older version of iOS you’ll probably see a larger download size because your iOS 14.0.1 update includes the changes from any iOS updates you skipped.

If your phone is on iOS 14.0, the iOS 14.0.1 installation will probably take less than 10 minutes to complete. It took about seven minutes to install on the iPhone X.

For more on the iOS 14.0.1 download and installation, take a look at our guide. 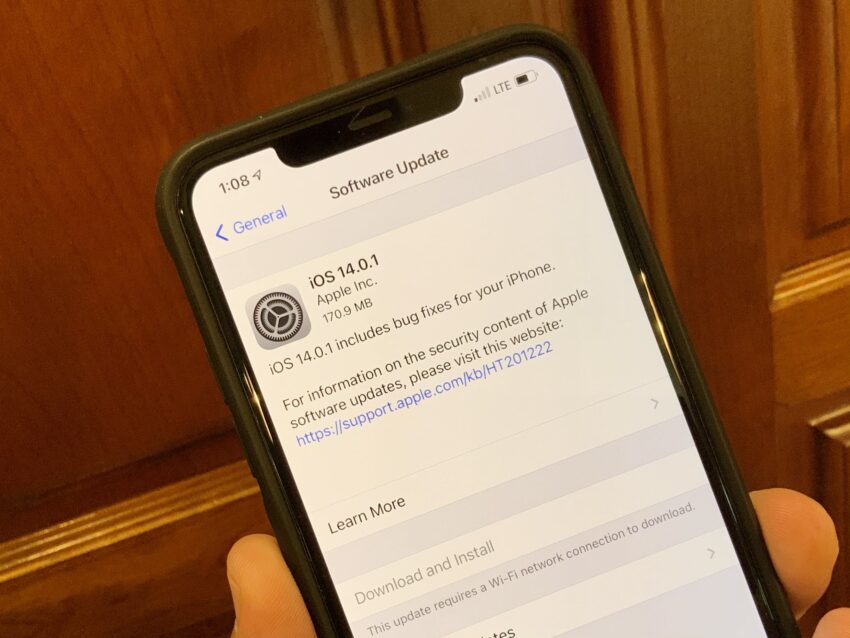 We’ve been using the iOS 14.0.1 update for weeks now and here’s what we’ve learned about its performance thus far:

If your iPhone is struggling with bugs or performance issues on iOS 14.0 or an older version of iOS, you might want to install the iOS 14.0.1 update on your iPhone right now.

If you need help making a decision, please check out our reasons to, and not to, install the iOS 14.0.1 update. It will help you decide if the upgrade is worth it.

We’ve published our mini iOS 14.0.1 reviews for the iPhone XS, iPhone XR, iPhone X, iPhone 8, iPhone 7, iPhone 6s, and iPhone SE so make sure you check those for additional feedback.

iOS 14.0.1 is causing problems for some iPhone users. Some of these problems are brand new. Others have carried over from previous versions of iOS.

Email aliases in the Mail application are reportedly broken in iOS 14. This is a widespread issue with no known fixes at this time. The issue is also on board the iOS 14.2 beta as well.

The company has also acknowledged that battery life issues and missing GPS data problems are impacting the iPhone and Apple Watch. Here’s the full list:

In order to fix these problems, you’ll want to follow the steps Apple outlines in this guide. If you’re experiencing battery life issues, you’ll want to download the latest version of watchOS 7.

If you run into an issue on iOS 14.0.1, take a look at our list of fixes for the most common iOS 14 problems. We’ve also released tips that could help you improve your phone’s performance and tips to help fix bad iOS 14 battery life.

Apple’s x.x.x updates always bring under-the-hood improvements and that’s what you get from iOS 14.0.1. There aren’t any new features on board.

Apple says the update has no published CVE entries aka security patches.

If you’re moving up from iOS 13, your iOS 14.0.1 includes all of the features from iOS 14.0. It’s a substantial list of features, improvements, and security patches.

The developer team behind the Checkra1n jailbreaking tool for iOS has released version 0.11.0 which adds support for iOS 14.0. The tool works with the following devices:

We don’t know if the tool works with iOS 14.0.1 yet so if you jailbreak, you’ll want to avoid an upgrade.

If your device is struggling on iOS 14, help is on the way.

Apple’s confirmed an iOS 14.1 update and we expect the software to roll out sometime before the iPhone 12 and iPhone 12 Pro hit shelves on October 23rd.

Apple is also working on iOS 14.2. iOS 14.2 is in beta testing and the milestone upgrade should carry new features and bug fixes for initial iOS 14 problems.

We don’t have an iOS 14.2 release date to look forward to just yet. If you can’t wait for the official release you can download the beta.

If you’re feeling leery about the move to iOS 14 or iOS 14.0.1, you might want to wait for the next version of iOS 14 to arrive. It should arrive soon.