The best FIFA 18 deal is at Best Buy, where you can get FIFA 18 for $8 when you stack up all the possible savings and trade in FIFA 17. This is an insane deal for a game that retails for $59.99 and there are even great FIFA 18 Ronaldo Edition deals that cut that price down to $24. This deal is only available if you pre-order the new FIFA 18 game and trade in FIFA 17 before September 16th at Best Buy. This is one of the biggest reasons to pre-order FIFA 18.

This FIFA 18 deal is a mix of up front discounts, trade-ins and rewards that you get later. You’ll pay a slightly higher price — about $10 more) than the listed price and then you will get a $10 reward later on your My Best Buy account. You don’t need to be a Gamer’s Club Unlocked member to use this deal, but you will save more if you are a paid member.

With these FIFA 18 deals and FIFA 18 Ronaldo Edition deals you can save up to $29.80 when you trade in FIFA 17, and you can stack that on top of the $10 pre-order reward and Gamers Club Unlocked 20% off to rack up huge savings. This is only available on the physical version of the game, and you must trade-in and buy the game in store to get the deal. 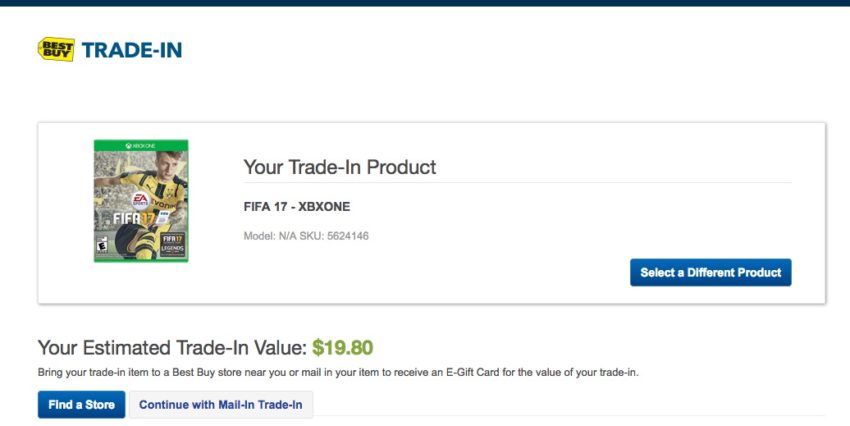 The best FIFA 18 deal you will find is at Best Buy for a limited time.

Gamers Club Unlocked is $30 for a two-year membership and it is worth it for many gamers. You get 20% off games and a 10% trade-in bonus. You can use it on all physical versions of games and it stacks on top of most sales. If you buy more than 3 games a year it is worth joining. You should even see the 10% trade in bonus help this trade in deal to save more.

Keep in mind that the FIFA 17 trade-in values can change throughout the week. Right now we see $19.80 for FIFA 17 on the Xbox One and $13.68 on the PS4. These are not a locked in specific value like we’ve seen for Madden 18 and for FIFA in previous years.

Here’s a breakdown of the best FIFA 18 deals with a FIFA 17 trade-in so you can figure out what you are getting. The Pre-Order bonus comes later, so you will need to pay that $10 portion up front. You can use it on anything at Best Buy once it arrives. Amazon is still only listing digital copies of FIFA 18 with no discount, so this is a massively better deal even if you normally use Amazon Prime game discounts.

This FIFA 18 deal is only available until September 16th, and you can only do it if you pre-order. The early FIFA 18 release date is September 21st, and we expect to see the FIFA 18 demo release date on September 15th. Don’t expect any other retailers to price match this trade-in combination deal. You can check out the other FIFA 18 deals to see if there is something you would rather go for.