The Galaxy Note 8 release date is quickly approaching and new leaks have revealed disappointing details about Samsung’s next smartphone. The Note 8 will feature some impressive specs and dual cameras on the back. That said, some of the information about the price and screen size has potential buyers disappointed.

Late last week, a highly trusted leaker shared information about what we can expect from Samsung’s new Note. Explaining it will have a large 6.3-inch Infinity Display that curves off the sides like the Galaxy S8, a powerful processor and even 6GB of RAM for improved performance.

And while all of that sounds pretty nice, a few other details offered up are rather disappointing. Those include a screen that’s almost the same size as the Galaxy S8+, a smaller battery, high price tag and a delayed release date. Here’s what you need to know about the Galaxy Note 8 release.

According to one report by Evan Blass, who’s accurately leaked countless Samsung devices in the past, the Galaxy Note 8 could cost roughly $1,000 when it arrives later this year. Making it the most expensive Galaxy smartphone to date. Potentially putting it out of reach for many.

His sources also suggest the Galaxy Note 8 will use a 6.3-inch Quad-HD Infinity Display. Which is only a hair bigger than the already available Galaxy S8+. Which, by the way, has a 6.2-inch display. This means the new Note will have nearly the same screen size, while reportedly offering a smaller 3,300 mAh battery.

The leak then goes on to state Samsung’s aiming for a late September launch for the Galaxy Note 8. After being unveiled in mid-September the phone should arrive around the globe before the end of the month. That’s only three months away, but it’s more than a month later than the Galaxy Note 5 or Galaxy Note 7. Meaning potential buyers will have to wait longer than before to get a phone not much different from what’s already available from Samsung. 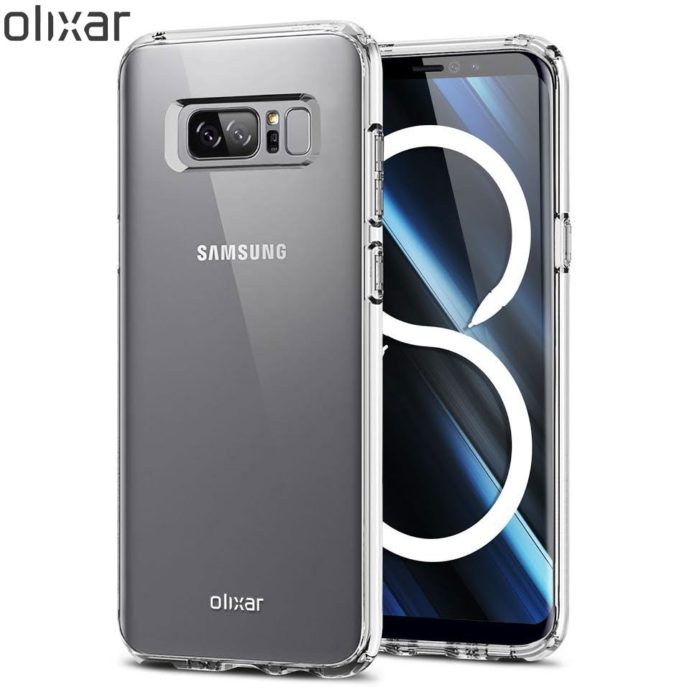 At the same time, the leaked case above suggests even more bad news. Samsung will again move the fingerprint sensor to the back of the phone. Due to smaller bezels in the front, where the screen takes up all the space, the fingerprint scanner will end up on the back. If these leaks are right, of course.

Rumors earlier this year believed Samsung would use a new technology and embed the fingerprint scanner into the screen but were unable to make it work in time for the Galaxy Note 8 release. Add in the fact that the screen is even bigger, coming in at 6.3-inches, that is quite the stretch.

Another trusted source @onleaks recently shared some renders of the Note 8 based on factory Bluetooth specifications sent to accessory manufacturers. This also confirms the rear fingerprint scanner, a big bulge for the dual cameras, and shows a return of the bezels around the top of the screen. And while this is likely an early mock-up and not representative of the final design, it’s more disappointing news.

Don’t get me wrong, the Galaxy Note 8 sounds like an excellent smartphone. Rumors suggest a powerful Snapdragon 835 processor with 6GB of RAM and 64 GB of storage. We might even see 128GB along with a micro-SD for extra storage options. There’s a new dual 12-megapixel camera setup on back to rival the iPhone 7 Plus or iPhone 8. Not to mention upgrades to the S-Pen stylus and other enhanced features.

The Galaxy Note 8 will likely be an impressive phone when it arrives. Samsung’s most powerful phone to date, but also its most expensive. All while offering fewer upgrades than buyers have come to expect from the Note lineup.

You can learn more about the Galaxy Note 8 in our roundup, and we’ll update this post as soon as we learn more.