We’ll show you how to install iOS 9.0.1 on the iPhone and iPad using just your smartphone or by connecting to iTunes and using a computer to upgrade to iOS 9.0.1.

Unlike the iOS 9 release we are not seeing any major problems with the upgrade process or slow iOS 9.0.1 downloads.

There are some time intensive things you should do before you install iOS 9.0.1, but if you already have a current iPhone or iPad backup, you should be almost ready to go. 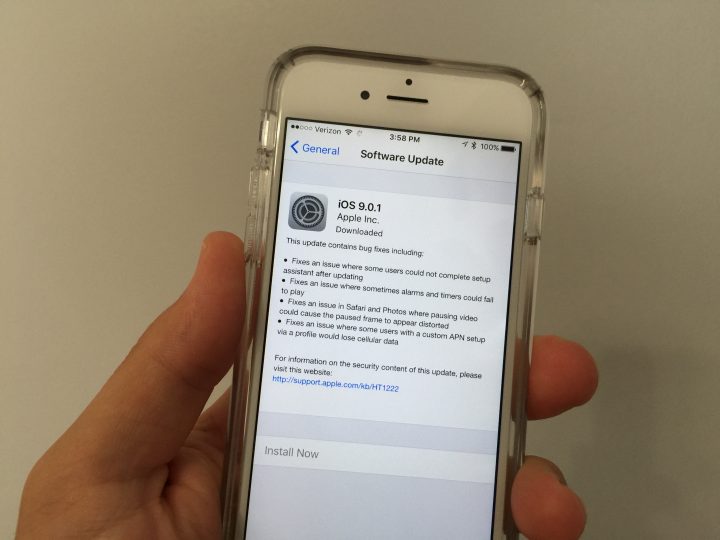 [contextly_sidebar id=”4hVzDrzqGh4rTSSIkCPusJ44JCuSM8KL”]Before you install iOS 9.0.1 your iPhone or iPad needs 50% or higher battery life and you need to connect to WiFi to download the update directly to your iPhone or iPad. Even for small updates like this you must use WiFi instead of cellular data.

The iOS 9.0.1 update is available for all devices that run iOS 9 or iOS 8. You do not need to install iOS 9.0.1 today, but there are some important fixes and our initial time with the update is positive so far.

Apple.s iOS 9.0.1 update arrived on September 23rd at 1 PM and it is a free download on iTunes or over the air directly to your iPhone, iPad or iPod touch.

We installed the iOS 9.0.1 update on the iPhone 6 and iPhone 6 Plus and the process was very fast. Both devices are already backed up as of last night, so we did not need to sync or backup before starting. 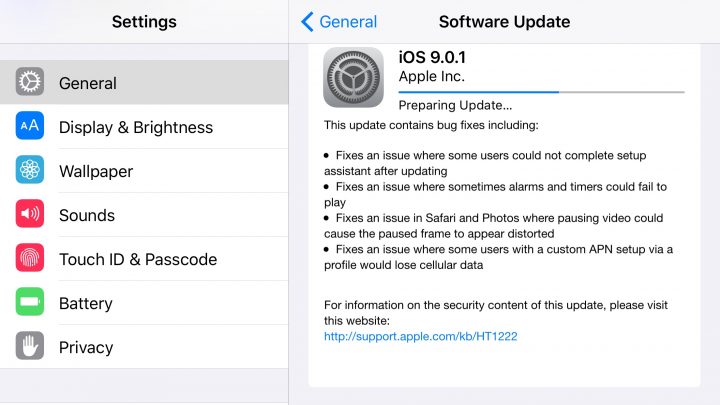 If you are on a decent WiFi connection the total time it takes to download and install iOS 9.0.1 should be roughly 10 minutes. During the installation portion you cannot use your iPhone or iPad, so plan ahead before you upgrade.

For users on iOS 8 still, the time it takes to install iOS 9.0.1 is longer as you will need a bigger update file to make that upgrade. Plan on at least half an hour for the process.

The iOS 9.0.1 update is available to download right to your iPhone or iPad, and that is the easiest way to upgrade.

You don’t need to wait to see a red notification bubble on the Settings icon to start the iOS 9.0.1 download, especially if you want the fixes that the update delivers.

If you use the iPhone alarms or you use a VPN that works installs on your iPhone, this is likely an update you want to install right now. 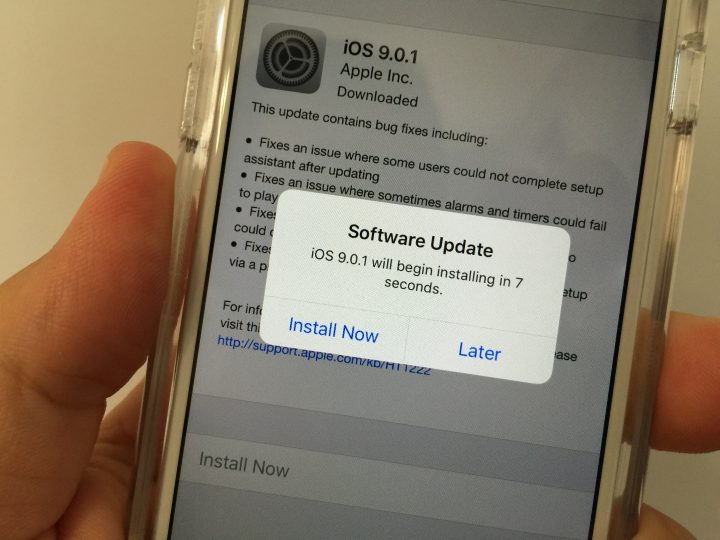 The iPhone will restart as part of the upgrade process and then will ask for your passcode.

If you want to use iTunes to install the iOS 9.0.1 update, you can plug your iPhone or iPad into your computer. Open iTunes and click on your device name and then Check for Update. In many cases iTunes will recognize that an update is available and prompt you to upgrade right away.

Users who are new to iOS 9 can see much of what’s new in iOS 9 below. All these features are also in iOS 9.0.1, in addition to the bug fixes.