The iOS 9 update allows users to better use Siri in a number of ways, and now you can personalize the Hey Siri feature on the iPhone. With this new option only your voice activates the Hey Siri function that lets you use the voice assistant while the iPhone is plugged in.

Hey Siri is available on iPhones that support Siri, and on the iPhone 6 and older it only works when the iPhone is plugged in.

iOS 9 will not change that, but with the new Hey Siri voice training option available in the iOS 9 update you can teach Siri your voice. Once you walk through this very short training and turn on Hey Siri, the iPhone will not respond when someone else says Hey Siri near you. This is great if you work in an office of iPhone owners or live with another iPhone user. 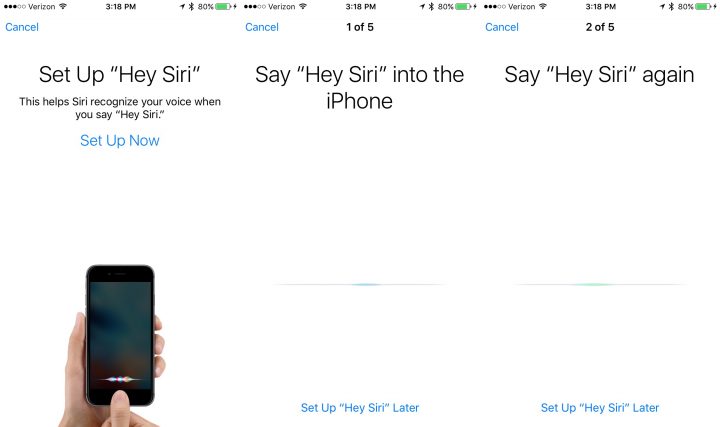 The iOS 9 update makes Siri easier to use with a new Hey Siri training option.

To get to this new Hey Siri training feature users need to go to Settings -> General -> Siri -> Hey Siri – > On and then follow the prompts to train Siri. The iPhone will walk you through several Hey Siri voice tasks so that it can get a feel for your voice.

Once this is set up you can see the effectiveness as Hey Siri in alternate voices will not turn activate the function.

While this iOS 9 feature adds personalization to your current iPhone it will also likely play a large role for the iPhone 6s. Apple adds better support for Hey Siri on the iPhone 6s and iPhone 6s Plus.

On the new iPhone 6s and iPhone 6s Plus the phone is able to always listen for the Hey Siri command, even if you are not plugged in. This is due to upgrades to the iPhone processor and co-processor, which make it possible without draining the battery life.

This is a built-in part of iOS 9 and it is available in the iOS 9 GM that users can install today for free. The iOS 9 release date is set for September 16th, which is when anyone can start the iOS 9 download and install the new update that enables this feature and many others.