The iOS 9.0.1 release date is here and it fixes a number of iOS 9 problems for the iPhone, iPad and iPod touch. This is the first iOS 9 update to arrive since the massive update last week and it includes several very important fixes for users who have yet to upgrade to iOS 9 and for users who are already on iOS 9.

The iOS 9.0.1 update fixes alarms that did not sound and a bug that broke cellular data connectivity on some iPhones with a custom APN. Here’s what you need to know about the specific iOS 9.0.1 fixes and features.

Apple’s iOS 9.0.1 update is a small bug fix update that will not take long to download and install on the iPhone or iPad with sizes around 35MB, but if you are upgrading to iOS 9.0.1 from iOS 8, you will still be in for a decently sized update. 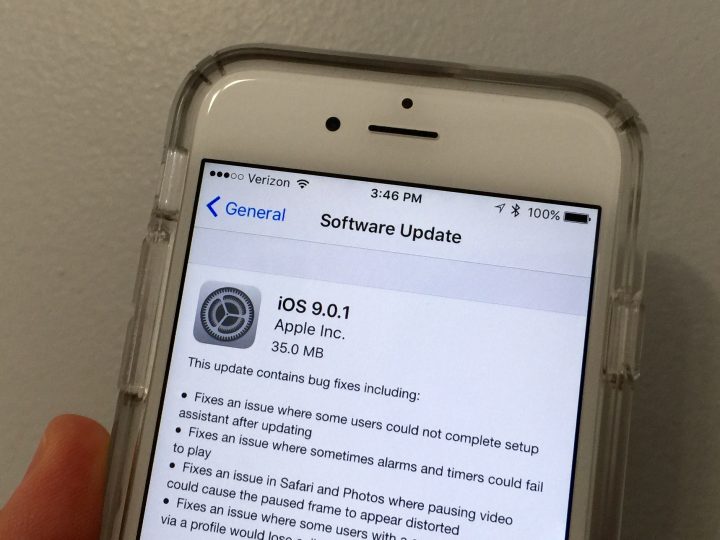 [contextly_sidebar id=”TuXRGsXpogVGZGUyutM0XP7xwQRfTUxo”]If you have yet to upgrade to iOS 9, the iOS 9.0.1 release will solve one of the biggest complaints that we’ve seen from users who could not complete the setup process.

Apple notes that the iOS 9.0.1 update “Fixes an issue where some users could not complete setup assistant after updating.” For these users who may still be on iOS 8, this should make upgrading to iOS 9 much easier with a straight shot to iOS 9.0.1.

This is also an important update for users who are already on iOS 9 and who are experiencing problems. There are things that are new in iOS 9.0.1 for users on iOS 9. Here’s why you may want to update to iOS 9.0.1 today.

If you are experiencing any of these problems it is a good idea to download and install the iOS 9.0.1 update now, especially if you are on iOS 9 already — and you use your iPhone as an alarm.

Apple’s iOS 9.0.1 update takes about 10 minutes to download and install to the iPhone 6 Plus. The speed will vary based on your iPhone model and internet connection. You need 50% or more battery life and must connect to WiFi to download the iOS 9.0.1 update.

Users can install iOS 9.0.1 from their device or by plugging in to iTunes to download the update on a computer.