Apple just announced iOS 10, the new iPhone iPad software that is coming to your Apple iOS devices this year. You can already install the iOS 10 beta and a public beta is coming next month ahead of a fall iOS 10 release date that will likely arrive alongside a new iPhone.

This is a very big update for fans of Apple Music and it delivers a good upgrade to smart home features.

This is a look at what you need to know about the iOS 10 update that is coming from Apple later this year. We’ll fill you in on what iPhones and iPads will get iOS 10 and other important details that iPhone owners need to consider including new features

iPhone and iPad users are currently running iOS 9.3.2 and we will see iOS 9.3.3 in the near future. There is a chance that Apple will deliver an iOS 9.4 update before iOS 10, but Apple is only talking about iOS 10.

If you look further out to a new iPhone in 2016 we expect to see it running an iOS 10 update that will also come to older devices. 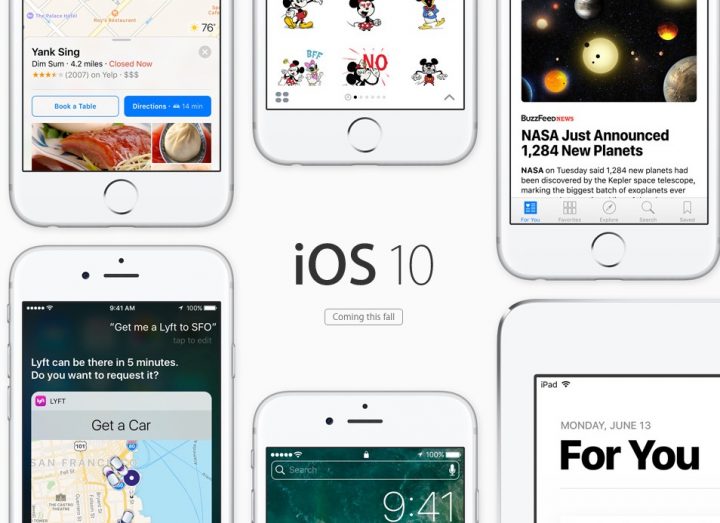 What you need to know about the iOS 10 release date.

Apple announced iOS 10 in June, and it is coming to a lot of devices later this year. You can already try it out on iPhone and iPad.

The iOS 10 release marks a milestone for the iPhone and iPad operating system that last received a major overhaul with iOS 7. iOS 10 is a mix of new features and new looks that users will notice.

The iOS 10 release date is in the fall. Apple did not announce a specific date, but you can expect it within a few days of the iPhone 7 release date.

There is a developer iOS 10 beta release date that arrived today, allowing users to try out the new iOS 10 features if they install a special profile or register as a developer. Most users will be better off waiting until July.

What you need to know about iOS 10 release dates and compatibility.

Apple confirmed an public iOS 10 beta release date for July, when you will be able to install an early version on your iPhone or iPad without any hoops to jump through.

What devices will support the iOS 10 update? We will likely know the iOS 10 compatible devices list in June at WWDC, when Apple should offer the first betas. With iOS 9 Apple offered support for more devices than anticipated, but it is unlikely that every device capable of running iOS 9 will work on iOS 10.

This list highlights the Apple devices that will work with iOS 10.iPhone 5

Even those older devices that can run iOS 10 will not see all features. With iOS 9.3 Apple chose not to offer support for Night Shift to the iPhone 5, iPhone 5c, iPhone 4s, iPad 4, iPad 3, iPad 2 and iPad mini.

Expect to see some iOS 10 features only available on an iPhone 7 or iPhone 7 Plus, a wide range of features on the iPhone 6s and iPhone 6s Plus and from there support could taper off for some new features, even if the devices support iOS 10.