Which Madden 18 G.O.A.T. Player Should You Choose

Here’s our take on if Madden 18 G.O.A.T. is worth buying, and what exactly you get with this edition on top of playing early. Keep in mind you can play faster if you nab this early Madden 18 release date that even beats the G.O.A.T. edition. Here’s how to get Madden 18 for $12 and Madden 18 G.O.A.T. for $27.49, which will leave you with a lot of cash to spend on Madden 18 MUT Packs. 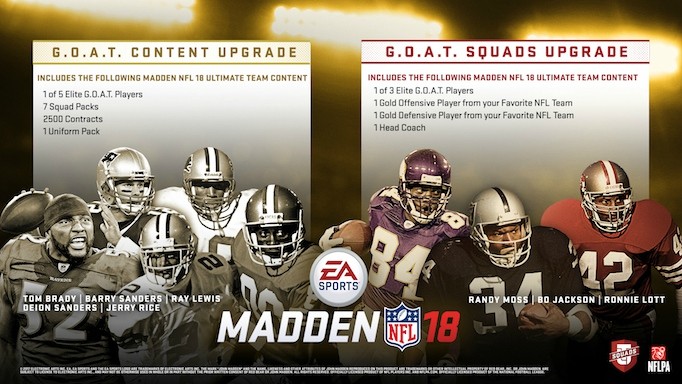 You can click those links above to learn more about the ratings breakdown of each of the Madden 18 Elite G.O.A.T. players that you can pick from. MUT Heads shows 84 ratings, but EA says 85 and 83 ratings. Keep in mind there is a separate $19.99 G.O.A.T. pack that allows you to pick one more G.O.A.T. player. If you grind through the Madden 18 Ultimate Team solos you have a chance to open another fantasy pack to pick a second Elite G.O.A.T., but for most players you only get to pick one G.O.A.T. player. You cannot auction this player and you cannot change your mind.

Keep in mind that in addition to picking a G.O.A.T. player, you will be picking other players. Most players should avoid doubling up on a position across the Rookie and the Elite G.O.A.T. players. Remember that the players will level up. EA says they can be upgraded to 87 overall, but some suspect it will go higher.

We highly recommend opening up all of the other packs before you open this up, so you know what you already have and don’t accidentally replace your best player in a pull.

Jake Stein, a producer on Madden 18 says it’s close, but. “It’s probably Deion or Barry and I probably give the slight edge to Deion.”

CookieBoy17, a prominent Madden 18 YouTuber says, “If you’re undecided on who to get for your GOAT Edition player for Madden 18, I suggest getting Barry Sanders. Elusive RBs this year are fun.”

This all comes down to what your style of play is and where you want to make the biggest difference overall. We are heavily leaning towards Barry Sanders as our G.O.A.T. player pick so that we can use the Madden 18 run mechanics to trounce the competition. We love using a run play to make the difference in a tough set of downs and we can rely on the Elite player that everyone can pick to fill in a wide receiver slot, pick up an excellent defender or even a star QB.

After playing Madden 18 in EA Access and unlocking a good Corner Back in the Solos, Barry Sanders is looking even better than ever.

If you are willing to spend $19.99 on the GameStop exclusive G.O.A.T. Squads Edition, Ronnie Lott or Randy Moss are neck to neck, and ultimately would come down to who we get in the other Madden 18 MUT packs that come with the G.O.A.T. edition of the game. The odds are good we’ll load up the defense with Lott, unless we luck out in pack openings.