Apple’s released a new iOS 11.1.1 update and the company’s latest release comes with a bug fix for an extremely annoying autocorrect issue.

Apple is hard at work on an iOS 11.2 update for the iPhone, iPad, and iPod touch, but the iOS 11.2 release date is probably still a few weeks away. In the meantime, the company’s released a brand new version of iOS 11, a tiny maintenance update that delivers a big punch.

The iOS 11.1.1 update is a maintenance release which means it comes with a short change log and a much smaller download size than its predecessor, iOS 11.1.

iPhone X users are looking at a mere 54MB download coming from iOS 11.1. If your iPhone 7 is currently running iOS 11.1, your download is just 44.6MB.

The iOS 11.1.1 update is a tiny update, but we’re already hearing about problems. Some users are reporting iOS 11.1.1 installation issues, others are reporting performance issues such as abnormal battery drain, lag, reboots, and issues connecting to Bluetooth devices.

Thanks to its size, your iOS 11.1.1 download should only take a few seconds to download if your device is connected to a high-speed Wi-Fi network.

If you’re moving your device from iOS 11.1, the installation should take less than five minutes. Your phone might reboot itself once or twice, but that’s perfectly normal.

If you are updating from an older version of iOS 11 or from Apple’s iOS 10 operating system, your download size will be much bigger and your installation will take a lot longer.

For more on timing, take a look at our walkthrough. 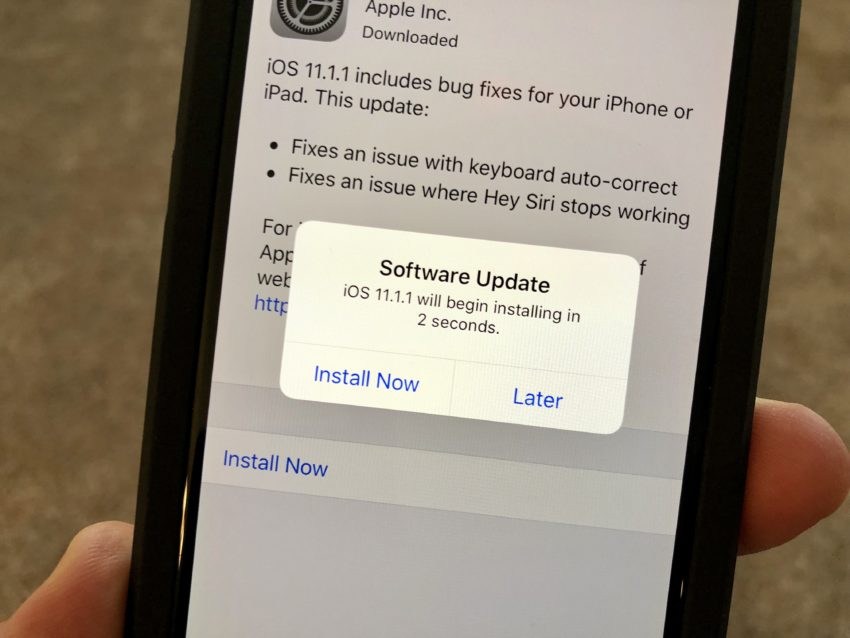 We’re currently running the iOS 11.1.1 update on the iPhone X, iPhone 7, iPhone 7 Plus, iPhone 6s, iPhone 6, iPhone 5s, iPhone SE, iPad Air 2, iPad Air, and iPad mini 2. We’ve only been using the software for several days now and here are some initial thoughts about its performance.

We didn’t run into any installation problems on our devices. The download and installation went smoothly. If you want to install the iOS 11.1.1 update right now you should be able to do so without long download times or major issues.

We’ve only been using it for a short time, but battery life appears to be holding up on all of these devices. We haven’t noticed any weird battery drain on our iPhones. Connectivity (LTE, Bluetooth, Wi-Fi) is also strong and we’ve successfully paired the devices with our routers and Bluetooth devices which include headphones and speakers.

iOS 11.1.1 feels pretty stable right now, but that could certainly change in a heartbeat. If you own an older device, you’ll want to be extremely careful with iOS 11.1.1.

The iOS 11.1.1 update doesn’t come with any new features or security patches, but it does come with two key bug fixes for iOS 11 problems.

Apple’s iOS 11.1.1 change log lists two bug fixes. One is a fix for an issue where Hey Siri would suddenly stop working. The other fix is for a widespread autocorrect issue that emerged after the iOS 11.1 release date.

On iOS 11.1, the OS would frequently autocorrect the letter “i” to the uppercase letter “A” and the question mark symbol. It would do this in third-party apps like Hangouts as well. We’ve tested iOS 11.1.1 and the bug appears to be fixed across the operating system.

The iOS 11.1.1 jailbreak was shown off Liang Chen of KeenLab during POC2017 in Seoul, South Korea. A proof-of-concept video is circling around, but it doesn’t guarantee a release for the general public.

As of right now, iPhone and iPad users need to be running iOS 10 in order to jailbreak an iOS device.

The iOS 11.1.1 isn’t causing problems for us, but others are running into trouble. 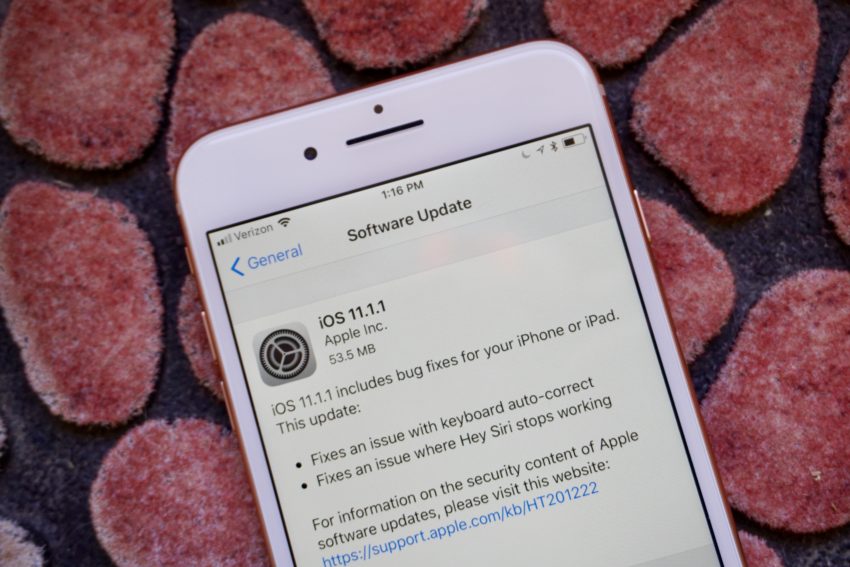 Some of the issues apparently carried over from iOS 11.1 and previous versions of iOS 11. Other problems are new and unique to iOS 11.1.1.

We expect the list of problems to grow as more people download iOS 11.1.1 to their phones and tablets

If you’re already noticing bugs or problems with iOS 11.1.1, take a look at our list of fixes for the most common iOS 11 problems. Our list covers abnormal battery drain, Bluetooth issues, and many other problems.

You might also want to take a look at our tips to improve iOS 11 performance and iOS 11 battery life. These guides will help if you start noticing lag or weird iOS 11.1.1 battery drain.

If the iOS 11.1.1 update is causing problems on your device, you can try downgrading to an older version of iOS 11.

Apple’s closed off the iOS 11.0 and iOS 10 downgrades which means there’s no going back to iOS 10 or the first version of iOS 11. If you’ve already moved your device to iOS 11, you’re stuck.

Our iOS 11 downgrade guide will take you step-by-step through the process so take a look if you already want to get off the iOS 11.1.1 update.

The iOS 11.1.1 update fixes some major iOS 11 bugs, but the new release isn’t perfect. Unfortunately, it could be a few days before we see the next iOS 11 update touch down for iPhone, iPad, and iPod touch.

Apple hasn’t confirmed an iOS 11.1.2 update though a release in November or December is certainly possible. If Apple does release iOS 11.1.2, don’t expect a beta.

The company currently has a single update in its (known) iOS pipeline. Apple’s confirmed an iOS 11.2 update for iPhone, iPad, and iPod touch and it’s currently in beta for the iPhone X, iPhone 7, and others.

Apple hasn’t confirmed an official iOS 11.2 release date, but it could arrive in December alongside the company’s new HomePod speaker.

If you’re dealing with iOS 11 problems, be on the lookout for new iOS 11.2 betas as we push through the fall. Apple will likely tack on additional fixes and tweaks to the beta ahead of the public release.