The iOS 11.2 update delivers Apple Pay Cash, faster wireless charging for the iPhone X and iPhone 8, and a long list of enhancements and bug fixes for issues plaguing the iPhone, iPad, and iPod touch.

Unlike iOS 11.1.2, Apple’s latest release comes with changes for all iPhone, iPad, and iPod touch variants. And that means it’s a huge download for all iOS 11-powered devices.

Those coming to the iOS 11.2 update from iOS 11.1.2 will get the smallest download while those of you coming from older versions of iOS 11 or iOS 10 will see a much larger download due to the updates you missed. The features and fixes from those updates are baked into your version of iOS 11.2.

iOS 11.2 is huge release and today we want to take you through the most important things to know about the latest version of iOS 11.

Our guide to iOS 11.2 includes our impressions of iOS 11.2 on several iPhone models, a look at the current state of iOS 11.2 problems, some quick information about the iOS 11.2 downgrade, and a look at what’s next from Apple.

Apple typically releases its iOS updates around 10AM Pacific Monday-Friday so the iOS 11.2 release on Saturday night came out of nowhere.

Downloading iOS 11.2 will take you a couple of minutes if you’re connected to high-speed Wi-Fi. It took about four minutes on the iPhone X and about three and a half on the iPhone 7. The download will take a little bit longer.

The installation on both devices took about six minutes to complete on the iPhone X and iPhone 7. We recommend setting aside at least 10 minutes to monitor the download and installation.

If you’re moving your devices from an older version of iOS 11, you can expect longer download times and a lengthier installation. Again, that’s because you’ll be getting the features from previous versions of iOS.

For more on the download and installation, take a look at our guide to iOS 11.2. 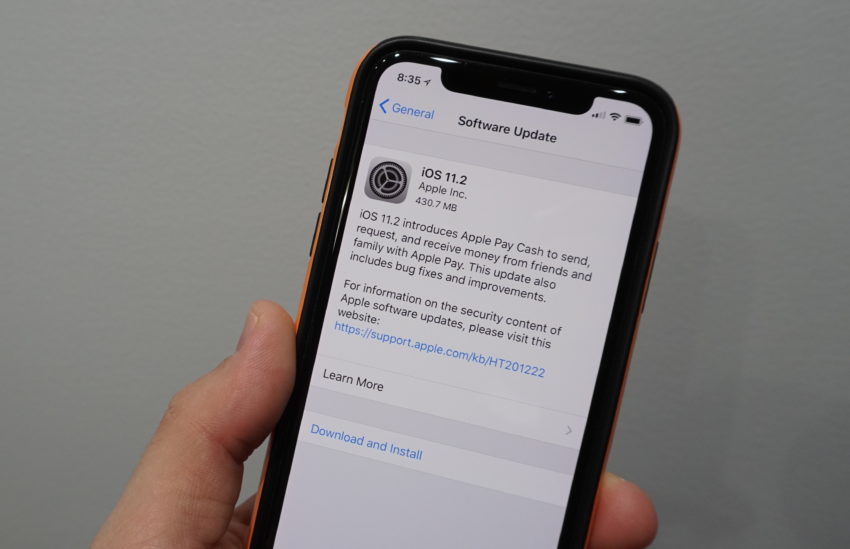 We haven’t noticed any severe or abnormal battery drain on the trio of devices. That could still change in the days ahead, but iOS 11.2 has, for the most part, treated our devices well.

Connectivity (LTE, Bluetooth, Wi-Fi) is strong and reliable on all of our devices. Wi-Fi download and upload speeds are normal, we’ve been able to connect the devices to Bluetooth speakers and headsets, and our cellular networks are working properly.

The iPhone X and iPhone 7 are fast, but we’ve noticed lag on the iPhone 6, iPhone 5s, and some of the iPad models in our possession.

We haven’t run into any major issues with our core apps which include Asana, Slack, YouTube, Spotify, Dark Sky, Chrome, Gmail, and Podcasts. None of them have crashed.

We haven’t noticed any catastrophic issues (tons of random reboots, bricking, etc), but you’ll want to be careful if you’re on an older device or if you’re running an older version of iOS. iOS 11.2 is a huge update and it could have a huge impact on your device’s performance.

If you need additional feedback about iOS 11.2, take a look at our reasons to, and not to, install the iOS 11.2 update on your device right now.

Apple rushed the iOS 11.2 update out to fix a date bug in iOS 11.1.2 that was causing some devices to crash loop. This is why the update rolled out on Saturday rather than on a weekday.

iOS 11.2 fixes more than just the date change bug. It includes a fix for the iOS calculator bug, Apple TV playback from Control Center, and a new animation when tapping the top right corner of music panel in Control Center.

There are also a few cosmetic changes including new camera emojis and some changes to Animojis. It also includes three new Live wallpapers for the iPhone X. The wallpapers come from Apple’s ‘It’s Here’ commercial.

iOS 11.2 also delivers Apple’s Apple Pay Cash platform. The feature, which Apple announced earlier this year, lets you to send and receive cash inside the Messages app on iPhones.

Apple Pay Cash is available for US-based customers only and it requires a iOS device on 11.2 with two-factor authentication set up via Apple ID.

Apple’s also made the Control Center gesture more obvious via a UI change. If you’re on the phone’s lock screen, you’ll see a small bar directly underneath the icons on the right side of the device’s screen. This is letting you know Control Center is there. The bar isn’t there on the home screen. 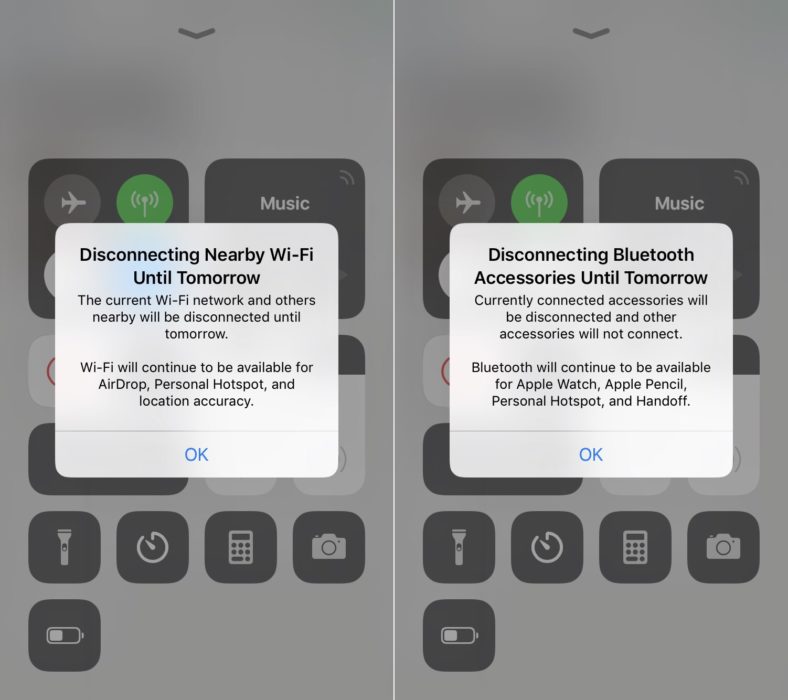 The company’s also clarified how the Bluetooth and Wi-Fi toggles in Control Center work in iOS 11. Prior to this release, the company had only outlined the changes in a support document.

As you can see in the screenshot above, tapping on one of these toggles for the first time in iOS 11.2 brings up a message. The messages clarify why Bluetooth and Wi-Fi turn themselves back on after being disabled from Control Center.

In order to permanently disable Wi-Fi and Bluetooth you still need to go into the Settings app and manually toggle them off. 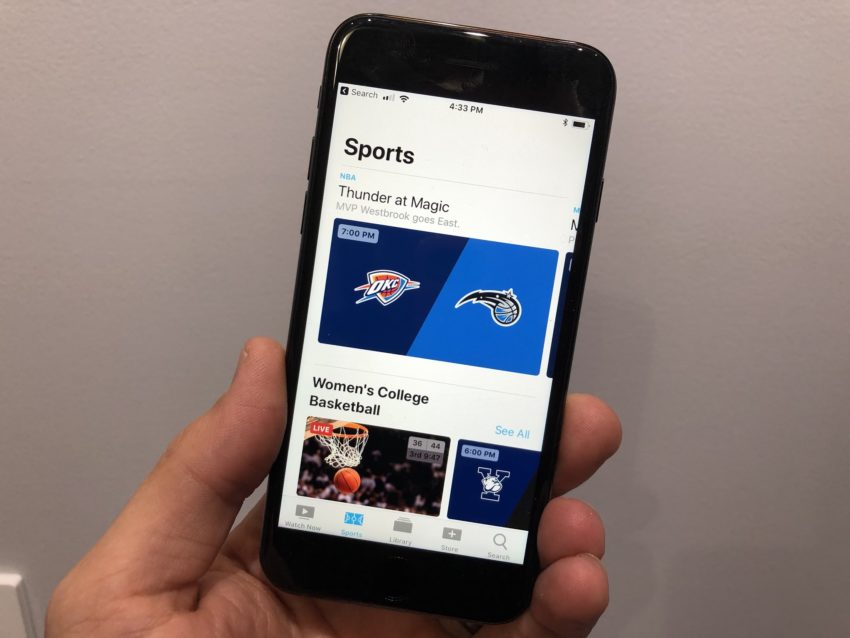 Apple’s also updated its TV app with a new Sports section and it’s accessible on devices running iOS 11.2 and tvOS 11.2.

The TV app’s Sports section allows you to watch live sports games via ESPN. As of right now, ESPN is the only one offering content, but that could change moving forward.

iOS 11.2 is a huge update and huge updates tend to cause lots of problems for iPhone and iPad users, particularly those with older models.

The iOS 11.2 update is still very new, but iPhone and iPad users are complaining about downloads getting stuck, problems connecting to Wi-Fi and Bluetooth, and surprise surprise, issues with HomeKit, problems with Sprint Wi-Fi Calling, abnormal battery drain. These issues are extremely common after a big iOS release.

If you’re running into problems on iOS 11.2, take a look at our list of fixes for common issues with Bluetooth, Wi-Fi, and your favorite apps. We’ve also put together some tips to improve iOS 11 performance and iOS 11 battery life.

If you start noticing issues on your iPhone, iPad, or iPod touch, you can try downgrading from iOS 11.2 update.

The company will eventually stop signing off on the older versions of iOS 11. It won’t make an announcement ahead of time so those of you considering a move need to make your move soon.

If you’re unfamiliar with the process, our iOS 11 downgrade guide will take you step-by-step through the downgrade.

Google recently released iOS 11.1.2 exploit details and there’s a chance we see someone release a working public jailbreak in the near future.

Unknown. Apple hasn’t confirmed an iOS 11.2.1 update or iOS 11.3 so it’s unclear when the company will release the next version of iOS 11.

The company is reportedly cooking up an update to iOS 11.2 though the company hasn’t outlined a date or a version number. The update is supposed to arrive sometime this week.

With Apple’s known iOS update pipeline empty, those of you dealing with iOS 11.2 problems need to be extremely proactive as we push into the new year.

Even if Apple does release an iOS 11.2.1 update this week, we expect the change log to be short and extremely focused.

4 Reasons Not to Install iOS 11.4.1 & 8 Reasons You Should
Related Topics:AppleiOSiOS 11iOS 11.2iPadiphoneTechnology