Don’t get stuck without something to do on your commute or at the store. Download these best solitaire apps and best free solitaire apps to your smartphone or today.

These great Solitaire apps work on Samsung Galaxy phones or any Android smartphone with the Google Play Store installed. They also work on your Android tablet. 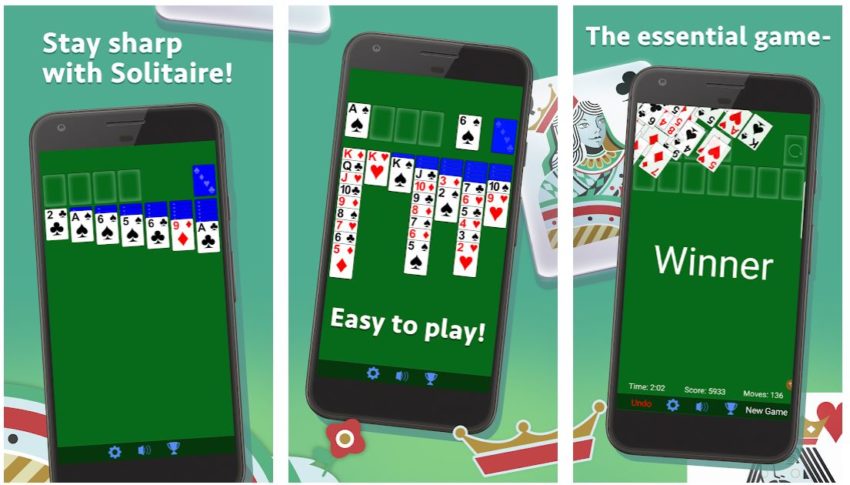 Solitaire by Zynga is the best free Solitaire app you can download on Android.

This Solitaire app includes 1 card draw and 3 card draw. That way, you can up the difficulty when 1 card draw gets repetitive for you. Two extra modes, Klondike Solitaire and Patience, let you mix things up when you’re ready to try something entirely different.

What Solitaire by Zynga lacks in extra modes, it makes up for with tons of features. You can undo any move you make and change the size of your cards. Leaderboards let you compare your stats with your friends and family.

Solitaire by Zynga is an ad-supported game in the Google Play Store. Because of that, it doesn’t have any in-app purchases.

Get Solitaire by Zynga from the Google Play Store 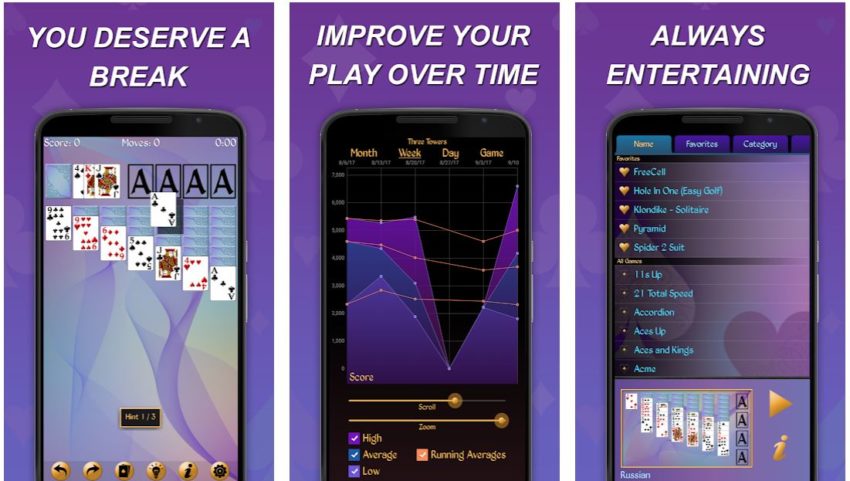 If you don’t like ads and want more games, definitely buy the Solitaire Megapack.

You get tons of modes with this great Solitaire app. It includes Klondike, Patience and Windows Solitaire. You can play 1 or 3 card draw too. The Solitaire Megapack lets you change how you’re scored, so you can try something different when you’re ready.

Switch to another game when you grow tired of Solitaire. The Solitaire Megapack has FreeCell, Golf, Spider, 3 Towers, Canfield, TriPeaks, Clock and Pyramid. It’s also stuffed with fan-favorite card games that you don’t get in other Solitaire apps, like Poker Square, Bowling, King’s Corner, Grandma’s Game and Picture Gallery. Track how much your card game skills are improving with built-in stats tracking.

The Solitaire Megapack costs $2.99 from the Google Play Store. It also supports multi-window on Samsung Galaxy smartphones, so you can watch a movie and play your favorite card game at the same time.

Buy Solitaire Megapack from the Google Play Store for $2.99

These are the best Solitaire apps in the Apple App Store. If you have an iPhone, iPad or iPod Touch, definitely download these apps and play your favorite card games wherever you are. 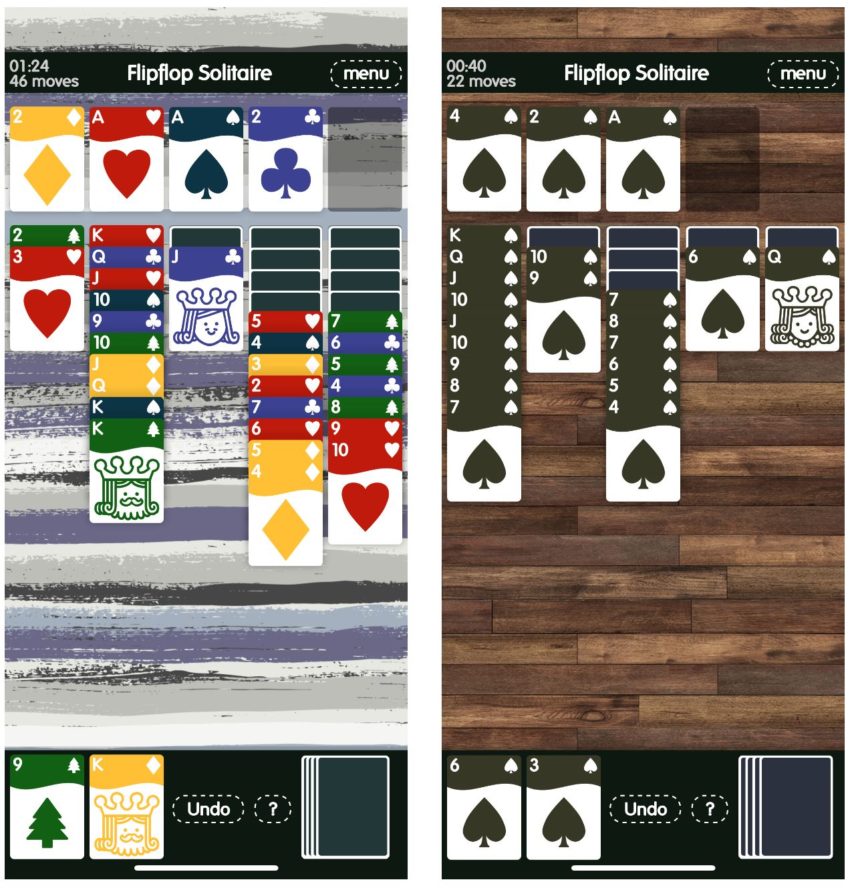 The best free Solitaire app in the Apple App Store is Flipflop Solitaire.

Flipflop Solitaire takes its name from its unorthodox take on Spider Solitaire. Instead of the usual rules, you can stack cards up or down. To make the game more interesting, you can only move a single stack of a single suit, so winning a game isn’t easy as you might think it is.

This Solitaire app comes with some great features. You always know if you’re actually improving or not because Flipflop tracks your best times, your least moves, your least undos and your wins. The better you perform, the more likely you are to unlock achievements, new deck colors and other card designs. Ambient music helps calm you as you play.

Flipflop Solitaire’s first 4 suits are free in the Apple App Store. A single $2.99 app purchase unlocks a 5th suit for you to use in games.

Get Flipflop Solitaire from the Apple App Store 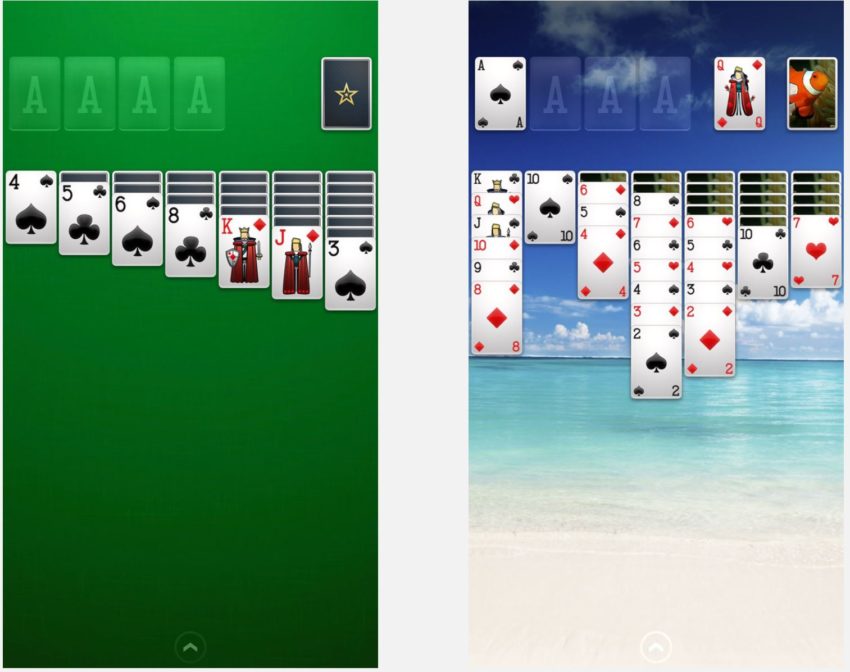 Solitaire+ for iPhone, iPad and iPod Touch is a great Solitaire app without any extras.

The Solitaire app doesn’t have a ton of game modes. You can play 1 Draw or switch to 3 Draw mode if you’re looking for a challenge. It also includes Vegas scoring.

What Solitaire+ lacks in extra modes it makes up for in great features. It’s a universal app, so it works on the iPhone, iPad and iPod Touch. Achievements and challenges give you something to aspire to as you build your skills.

Solitaire+ also encourages you to get better. In-game hints help you improve your skills and unlock its achievements. It’s never too late to turn around a game because you can undo as many moves as you want. If you can’t complete a game, have your iPhone do it for you to learn new techniques.

Thanks to built-in customization options, you decide how the back of your deck and the game’s backdrop looks. Solitaire+ doesn’t charge you extra for new photos and decks, just use a picture from your photo library.

Buy Solitaire+ from the Apple App Store for $4.99

Taking your Windows 10 laptop or 2-in-1 with you? Download the best free solitaire apps and best paid Solitaire apps for Windows. These great apps work with a mouse and on a touch display. 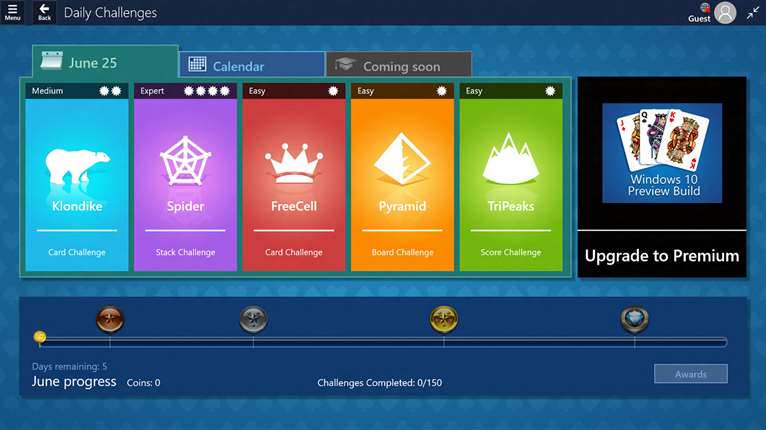 Microsoft Solitaire Collection has tons of card games. That’s what makes it the best free Solitaire app you can get on Windows.

This great Solitaire app has Spider, FreeCell, Klondike, TriPeaks and Pyramid. That way, you can mix things up when you’re ready to try something different.

Open the app each day for new challenges and opportunities to claim bragging rights among your friends. Thanks to Xbox Live support,  you can compare scores with friends who also play on Windows 10. You never lose progress because the app always saves progress and syncs it with your other devices.

Microsoft Solitaire Collection is free in the Microsoft Store. However, you can purchase new deck themes and backdrops using in-app purchases. 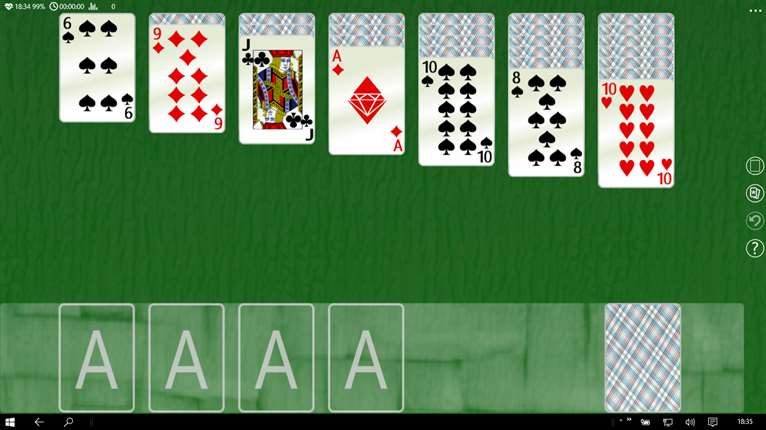 The best Solitaire app that you can buy for Windows is Solitaire Collection. It’s stuffed with familiar card games and modes you haven’t heard of.

Solitaire Collection is perfect for anyone with short chunks of free time. You can close the game and begin exactly where you left off. One tap lets you undo moves that you shouldn’t have made.

You can download Solitaire Collection from the Microsoft Store to your PC now.

Buy Solitaire Collection from the Microsoft Store for $1.49