Prior to the Fallout 4 release in November, consumers were up in arms about the Fallout 4 Pip Boy Edition. Bethesda’s collectors edition has been sold out in the United States since June and resellers on eBay have been charging an arm and a leg for the bundle. 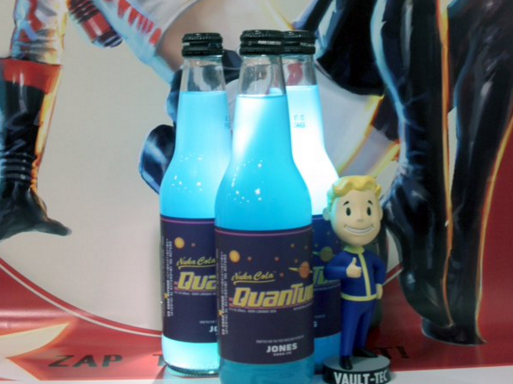 What is Fallout Nuka Cola Quantum?

Bethesda teamed up with Jones Soda and Target to sell a limited edition drink that’s modeled after the well-known in-game item. Nuka Cola is Fallout’s version of Coke or Pepsi. Or, Jones Soda. The developer hasn’t said. 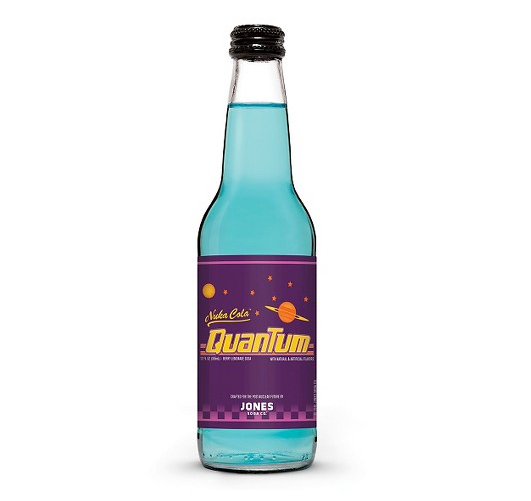 The product that Target is selling in stores is of the Quantum variety. Quantum Nuka Cola is colored blue and not caramel/brown like the regular version of Nuka Cola. If you’ve played Fallout 4 or Fallout 3, you’re familiar.

When and if you’re able to get your hands on one of these bottles, you’ll get a berry-flavored 12 oz drink. While it might be tempting to open, most people are buying it as a collectible. Thing is, it’s still hard to find.

While it probably won’t ever be available in mass quantities, prospective Fallout Nuka Cola Quantum buyers will be happy to know that Target released more stock into its stores.

The three companies involved (Bethesda, Jones and Target) announced plans to release new Fallout Nuka Cola stock and they made good on that promise in mid-December.

Target is selling the bottles for $2.99 each. This is the standard price. In an effort to cut down on the number of scalpers out there, Target will only allow customers to buy two bottles.

Scalpers on sites like eBay have been trying to charge $30 or more for one bottle and they continue to try and get more than $25 as we push deeper into the year.

You can’t buy Nuka Cola Quantum through Target’s website. You have to find it in-store. And that can be a little bit tricky.

Target’s website allows you to check nearby Target locations for Nuka Cola Quantum stock but there’s a chance you might come up empty today, tomorrow and in the future because supply simply can’t keep up with demand.

If you’re interested in buying a bottle, know that your options are pretty limited. It’s an exclusive to Target which means that you can’t waltz into Walmart and snag one.

Out of the 20 stores near us, only three have ample stock. Eight stores are completely sold out while the rest are currently experiencing stock shortages.

You’ll probably want to check online or call ahead if you want to pick one up tomorrow, this weekend or sometime in the months ahead. 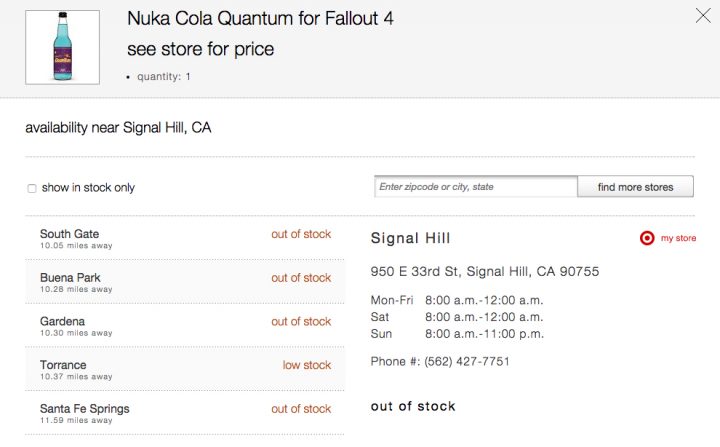 If you don’t want to deal with all of that, you can also buy it from resellers though you’ll have to pay far more than $3 for a bottle. Resale prices aren’t very friendly right now with some auctions going for as much as $35 on eBay.

It’s important to note that Fallout Nuka Cola is still limited to stores in the United States. Jones says that it’s working with Bethesda to get the product out to fans and soda lovers Canada though no time frame has been given for the release there or anywhere outside of the U.S.

If you’re simply looking to buy a Nuka Cola collectible and you’re fine with that collectible coming from somewhere other than Target, there are some alternatives to look at. 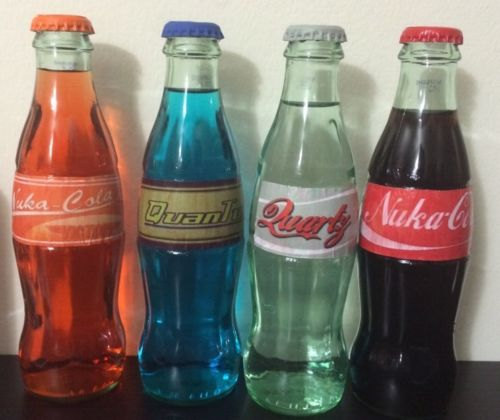 There are a number of good-looking options on Etsy. They aren’t made by Jones and Bethesda and they might not include berry soda but their worth a look if you’re simply looking for something to add to your Fallout 4 collection.

How to Make Your Own Nuka Cola Quantum

If you’d prefer to make some yourself, you can do that too though the outcome is different than what you’ll get from Jones’ product.

A fan of the series has put together a Nuka Cola Quantum recipe that requires Gatorade, a Monster Energy drink, and Mountain Dew. 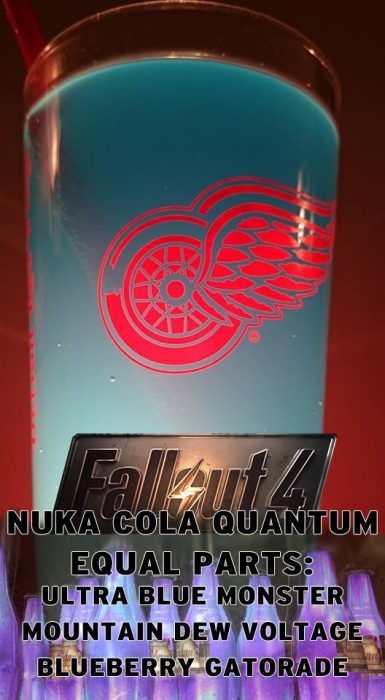 It has the look of Nuka Cola Quantum though it’s probably going to be a little too much caffeine for most people. (I wouldn’t drink it.)

But if you live in Canada or somewhere where the official product isn’t widely available, this is an option to look at.