The iOS 11 update is far from perfect. There are a lot of new iOS 11 features and plenty of changes that you will need to adapt to. Here is how you can turn off five of the most annoying iOS 11 features on your iPhone and iPad.

Unfortunately, we cannot turn off the new Notification Center behavior and we can’t show you how to get 3D Touch multitasking back. While Apple is abandoning the home button for the iPhone X, they are embracing it for iOS 11 on all the other iPhones.

We’ll show you how to get some of your iOS 10 functionality back and in other cases it will turn off an annoying iOS 11 feature. You can also downgrade to iOS 10 for a limited time if you don’t want these new features. 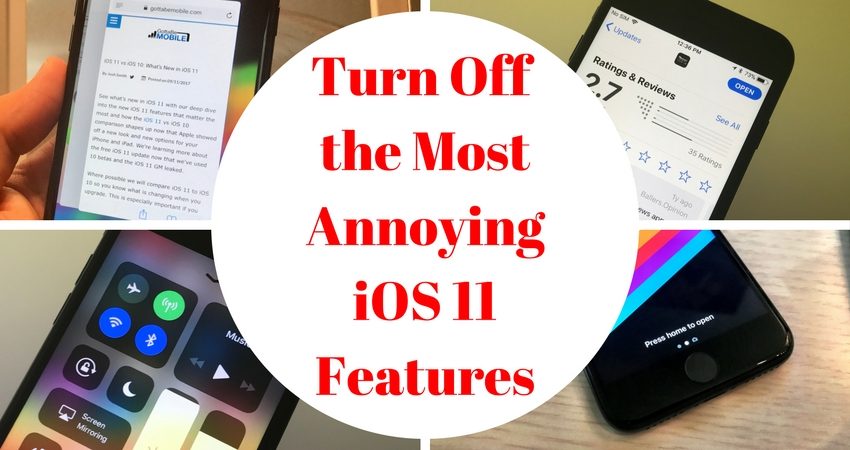 Here’s how to turn off the most annoying iOS 11 features.

Go to Home Screen From Multitasking

Tap on the top edge of the screen or right below the cards, or wipe all the way to the right and tap on the home screen. It’s not the same, but it’s an easy adjustment to make so you can get back to your home screen.

How to Turn Off iOS 11 Auto Brightness

Apple removes the ability to turn off auto brightness in iOS 11 in the main menu, but it is still there. You just need to go deeper to find it. Like many handy settings, Apple buries it in the Accessibility options.

Most people should leave this set to on, since the iPhone does a pretty good job of adjusting, but if this annoys you, you can turn auto brightness off in iOS 11 for good. Just remember the brighter your screen, the worse your battery life will be.

How to Actually Turn WiFi Off on iOS 11

In the iOS 11 Control Center you can tap on the WiFi icon, but it doesn’t turn off WiFi. This tap used to turn WiFi off, but now it just disconnects from your current WiFi. This means you may re-connect to another WiFi network when you leave home or are driving around.

You cannot change how this works, but you can get around this by going to Settings -> WiFi -> Off. It’s not as convenient, but if you find that your WiFi keeps reconnecting to random networks or you can’t cheat in Pokémon Go, that’s what you’ll need to do

Apple is pushing developers to use their prompts to ask for app reviews. That’s a step in the right direction, but if you hate seeing these, you can turn them off in iOS 11.

Now any app that uses the Apple request will not ask you for an app rating again. You may still see these from apps that use their own prompts, but Apple may be cracking down on that in the near future.

Turn Off Press to Unlock iPhone

Apple made this change in iOS 10, but it’s still there in iOS 11 and a source of frustration for many users. With iOS 10 and iOS 11, you need to push the home button after Touch ID recognizes your finger to get to the home screen.

If you want to simply rest your finger on the home button to unlock and go to the iPhone home screen, you can do that by going to Settings -> General -> Accessibility -> Home button and turn on Rest Finger to Open.