Apple is set to announce the iPhone X and iPhone 8 at a special event this week, and it may be tempting to plan to get in line for the new iPhone. It’s not the best idea to line up for any new iPhone, but it’s an even worse idea this year.

Even with the best possible set of circumstances, the iPhone X release date is going to be on September 22nd, and that’s the best case. We are hearing that the top of the line iPhone X may not go on sale until October. While this individual is likely planning to rotate in and out, there is the potential that he will be waiting in line for the iPhone 8 for close to a month.

Two days ahead of the actual announcement itself, the first person has made camp outside the Sydney Apple Store for #iPhone8 pic.twitter.com/7R6TLYrtja

Most of the iPhone X lines won’t start in earnest until closer to the iPhone X release date. Normally we see some lines pop up 2-3 days early, but the biggest growth is in the early morning on the iPhone release day. Expect lines to go from half a dozen to several dozen between 2 AM and the 8 AM store opening time that we expect to see at carriers and Apple Stores.

Last year you couldn’t buy the iPhone 7 Plus in store on release day at most carrier stores and even at many Apple Stores. The iPhone 7 in Jet Black was also basically impossible to find in stock at a store even if you were first in line. We’ve heard from people who waited in line for the new iPhone and even though they were first, they couldn’t get the model they wanted. 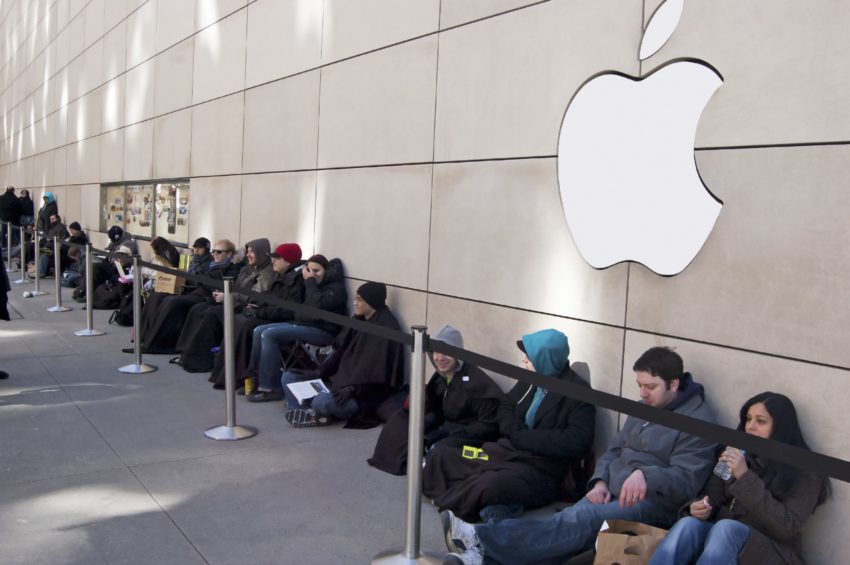 This year, expect it to be even worse. KGI Securities estimates that the iPhone X production is limited to 10,000 units a day, which could lead to just around 1 million total iPhone X units to sell on the opening weekend. Apple typically reports 5 to 10 million iPhone sales on a new iPhone weekend. Many of these are spoken for during a pre-order process that we expect will start this year.

If you want the iPhone X, don’t line up for it and don’t line up for it right now. Instead plan on staying up late to pre-order at 12:01 AM Pacific, 3:01 AM Eastern Thursday night into Friday morning this week when we expect pre-orders will start. Many times the stock at Apple stores and carriers will be spoken for with pre-orders and will not make it to the local store unless they do in store pickup. Typically the stock is better at Apple Stores than at carriers or Best Buy, but Apple stores also attract the biggest lines.

Apple allowed people to order online for in store pickup with the iPhone 6s in 2015, but did not include this option for pre-orders placed at midnight for the iPhone 7. It is not clear if Apple will offer in store pickup for iPhone 8 pre-orders but we wouldn’t hold our breath. Ultimately, the best way to get the new iPhone as soon as possible is going to be pre-ordering it online as soon as Apple and carriers allow you to do this. If you pre-order you can still take the new iPhone into Apple or into your carrier to get help setting it up.