Apple’s iOS 11.2.5 update is out of beta and it delivers a short list of changes including support for the HomePod speaker. It’s also causing serious problems for some iPhone, iPad, and iPod touch users.

iOS 11.2.5 is a maintenance release for iPhone, iPad, and iPod touch users though it’s a little bit larger than your standard bug fix release. It comes with a mixture of bug fixes, patches, and yes, some new features.

In this guide we’ll take you through the most important things to know, right now, about the iOS 11.2.5 update’s changes, its performance, iOS 11.2.5 problems, and what’s coming next from Apple.

If you’re currently running Apple’s iOS 11.2.2 update, you should be able to get the iOS 11.2.5 update running on your device in less than 10 minutes.

If you own an iPhone X you’re looking at a 175MB download size. iOS 11.2.5 should be a similar size for most iPhone and iPad models. If you’re connected to a fast network, your download should take less than a minute.

The iOS 11.2.5 installation process took about six minutes on the iPhone X. If you own an older device, it could take a little bit longer to finish up.

If you’re currently running an older version of iOS 11 on your iPhone or iPad, you can expect a bigger download and a longer installation period.

For more on the exact timing for your device, take a look at our iOS 11.2.5 download time walkthrough. 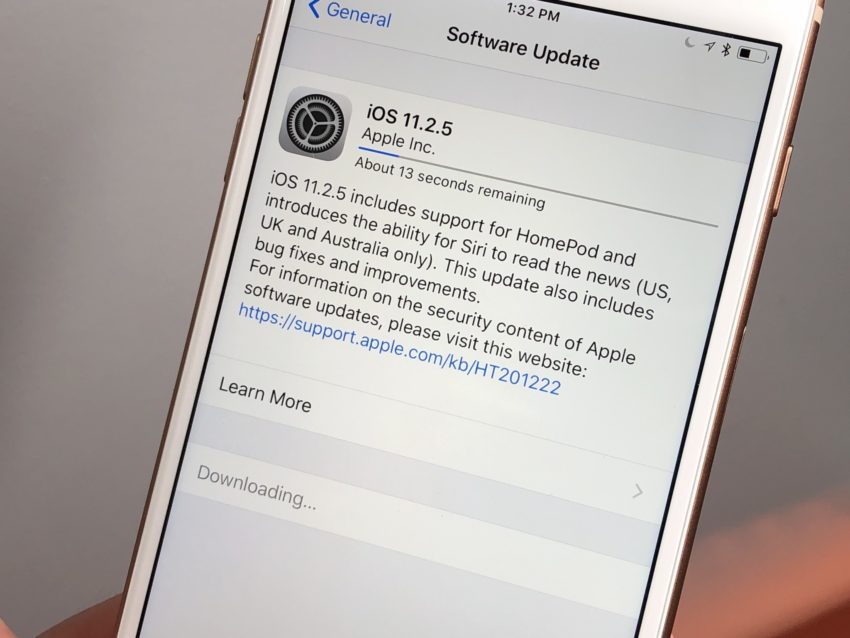 We’ve been using the iOS 11.2.5 update for an extended period of time and here are our impressions of the software running on the iPhone X, iPhone 7, iPhone 6, and others.

We haven’t experienced any weird battery drops. Battery life appears to be normal across all of our devices.

We’ve successfully connected the trio of iPhones to Wi-Fi and Bluetooth. Speeds appear to be normal and we haven’t experienced any dropped connections. GPS and cellular data appear to be working normally as well.

We haven’t noticed any major problems with Twitter, Slack, Asana, Gmail, Chrome, or Spotify. Our core apps are performing well, but that’s obviously a small sample size. There’s a chance your core apps start acting up on iOS 11.2.5.

We haven’t experienced any lag on the iPhone X or iPhone 7 though we continue to notice occasional lag on the iPhone 6. On iOS 11.2.5, we’ve seen lag when using the keyboard, when pulling down Control Center, and when opening folders.

Most people should install iOS 11.2.5, but those of you using older devices should proceed to it with caution. We haven’t run into any major problems, but there’s a chance you will.

If you need additional feedback about iOS 11.2.5, take a look at our reasons to, and not to, install the iOS 11.2.5 update on your device right now.

The iOS 11.2.5 update includes a new Siri ability where users can instantly stream a news podcast when the personal assistant is asked about the news. This feature started rolling out to iOS 11.2.2 users a few days ago, but it’s now widely available in the United States, United Kingdom, and Australia.

Apple’s latest update also comes with support for the HomePod speaker. Apple notes that you can now setup and automatically transfer your Apple ID, Apple Music, Siri and Wi-Fi settings to HomePod. 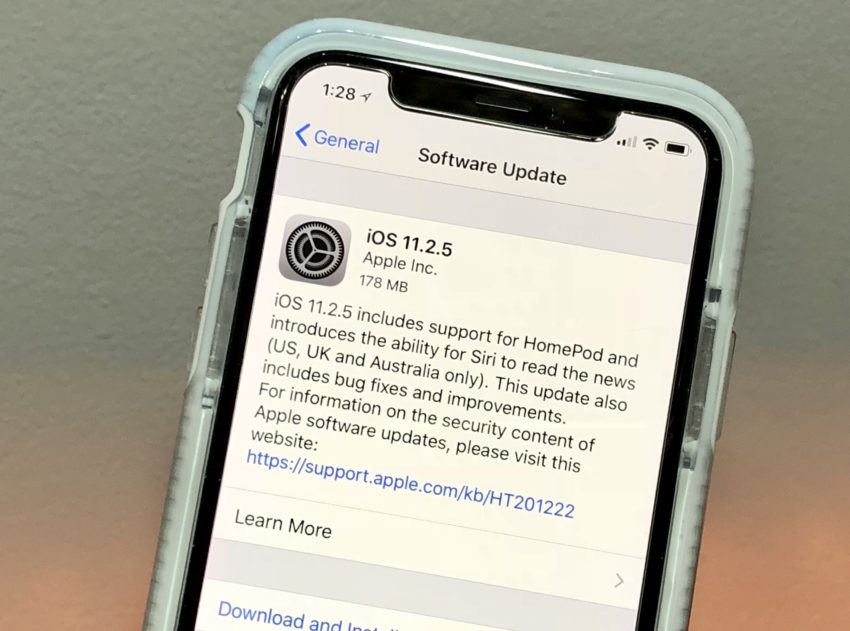 The iOS 11.2.5 update patches up the malicious chaiOS link exploit.

If you’re running iOS 11.2.2 or below and receive a specific GitHub link through the Messages app, your iPhone or iPad can lockup or respring. The Messages app will also become unusable.

The iOS 11.2.5 update comes with several bug fixes for lingering iOS 11 problems. These include:

The iOS 11.2.5 update is causing problems for some iPhone and iPad users. 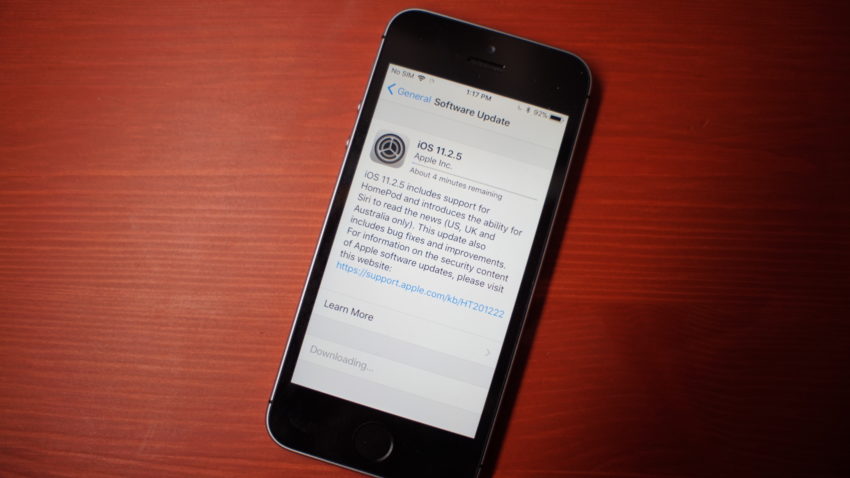 Italian blog Mobile World has also discovered a nasty iOS 11.2.5 bug that lets people send a specific character that will crash an iOS-powered device and block access to the Messages app. It can also block apps like Facebook Messenger, Gmail, Outlook, and WhatsApp.

Apple’s iOS 11.3 update fixes the problem, but the update is still weeks away from a release. 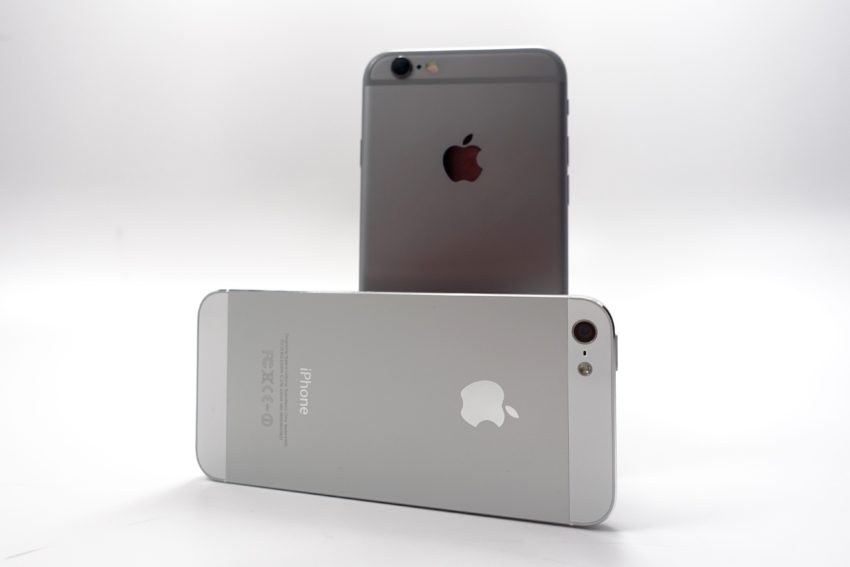 Unfortunately, you can’t drop down to anything older than iOS 11.2 either. Apple’s permanently closed off downgrades to older versions of iOS including iOS 10.

It’s unclear when Apple will roll out an emergency fix for the springboard issues, but it sure sounds like an iOS 11.2.6 update is in the works. Apple says a fix is coming “soon.”

An iOS 11.2.6 update is unconfirmed, but Apple’s confirmed an iOS 11.3 for release this spring.

The iOS 11.3 update is official and it’s set to bring a variety of changes to iPhone, iPad, and iPod touch including new battery features, new Animojis for the iPhone X, health records in the Health app, and more.

Keep an eye out for new iOS 11.3 betas as we push toward Apple’s semi-annual spring launch and the rumored iPhone SE 2 release date.