Unlike the previous version of iOS 14, iOS 14.8.1 is a small maintenance upgrade and it brings security enhancements to iPhone owners. It doesn’t have any new features on board.

With that in mind, we want to take you through everything there is to know about Apple’s new iOS 14.8.1 update for iPhone.

We’ll start with some quick thoughts on iOS 14.8.1’s performance.

If your iPhone is currently running iOS 14.8, you’ll encounter the smallest download. For iOS 14.8 users, the iOS 14.8.1 download checks in at a few hundred megabytes.

iOS 14.8.1’s exact size depends on your iPhone model and the version of iOS it’s currently running. So if your iPhone is running an older version of iOS, you’ll likely see a bigger download because your iOS 14.8.1 update includes the changes from iOS updates you skipped.

If you’re jumping up from iOS 14.8, the installation process should take less than 15 minutes to complete. It took about seven minutes to install on an iPhone 7 that was previous running iOS 14.8.

For more on the iOS 14.8.1 download and installation, take a look at our guide. 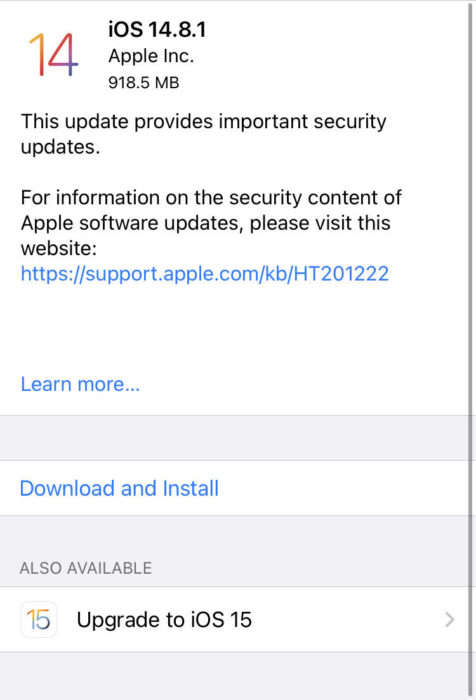 We’ve been using iOS 14.8.1 on a few iPhone models for several days now and here’s what we’ve discovered about the software’s performance thus far:

If you’re running into bugs or performance issues on iOS 14.8 or an older version of iOS, you might want to install the iOS 14.8.1 update on your iPhone right now.

If you need help making a decision, please check out our reasons to, and not to, install the iOS 14.8.1 update.

We’ve published our iOS 14.8.1 reviews for the iPhone 8, iPhone 7, iPhone SE, and iPhone 6s so check those guides for additional feedback if you need it.

iOS 14.8.1 is causing problems for some iPhone users. Some problems are new, others have carried over from iOS 14.8 and older versions of iOS.

Apple isn’t signing on iOS 14.8 which means you can’t drop your phone’s software back to the previous version of iOS 14 if iOS 14.8.1 causes problems. You can’t downgrade to anything older than iOS 14.8 either.

iOS 14.8.1 is a very small update and it’s focused on security. It has 12 security patches on board.

If you’re interested in the particulars, you can read more about Apple’s new patches over on Apple’s security site.

Apple lets iPhone users stick around on iOS 14 so you can skip the company’s new iOS 15 operating system. iOS 15 brings numerous improvements and most iPhone users will want to upgrade.

If you do decide to stay put on iOS 14, Apple will roll out new iOS 14 software though change logs will likely be limited to bug fixes and security patches.

4 Reasons Not to Install iOS 14.8.1 & 11 Reasons You Should
Related Topics:AppleiOSiOS 14iOS 14.8.1iphoneSoftwareTechnology