The iOS 11 update is coming this fall with a massive set of new features and more changes to how the iPhone looks. This is a look back at how much the iPhone software has changed from the first iPhone OS software, iOS 1, to the upcoming iOS 11 update.

Apple didn’t officially call the software iOS until iOS 4, but for simplicity sake, the iPhone OS 1 software is iOS 1. This early version of iOS arrived in June 2007 alongside the iPhone and included many built-in apps like an iPod app, Phone app, Text, Photos, Mail, Safari, Maps, Stocks and Weather.

You couldn’t copy and paste and there was no way to install other apps on the iPhone without jailbreaking the phone. This is a major difference between the first version of iPhone software and iOS 11 that is coming in 2017 — ten years later. 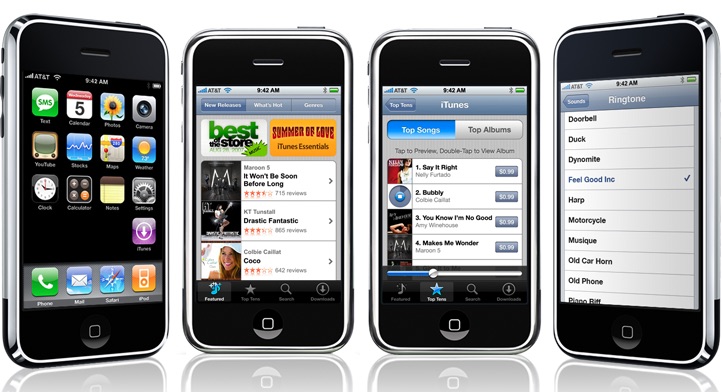 As you can see in the photo above, there aren’t many apps on the iPhone with iPhone OS 1. The apps also look very different than they do now. Apple killed the iPod app and made it into Music. There is no longer an official YouTube app and Maps no longer relies on Google for data as Apple Maps using their own information.

All of the icons are different when you look at the new version of iOS 11 compared to the first iPhone. Apple now includes more stock apps and you cannot keep apps off to the bottom right like in the image above.

The iOS 11 update builds on many of the features Apple added over the last decade including a front facing camera, Apple Pay, Siri, iCloud, Control Center, the App Store and Wallet.

Apple’s iOS 11 update arrives in the fall alongside a new iPhone and is a free update. The first iOS updates for the iPod Touch required a $19.99 payment while the iPhone updates were free. The iOS 11 update runs on the following devices;

You can try the new iOS 11 update in beta form right now. If you decide to do this, make sure you follow this guide and read up on why you shouldn’t install the iOS 11 beta yet.