If you want the fastest iPhone 8 experience this year, you’ll want to consider switching to T-Mobile. A new report from Ookla and Speedtest share that T-Mobile delivers the fastest speed score on the iPhone 7. We expect the T-Mobile iPhone 8 will deliver the same speed benefits, giving you a speed boost when using apps, uploading photos, downloading and streaming videos.

The average speed of mobile downloads increased 19% in 2017, and while all of the major carriers posted faster downloads, there is a clear winner among the big four and it may not be the one you expect. Using over 3 million unique devices and 14 more than 14 million speed tests Ookla and Speedtest scored the speed of Verizon, AT&T, T-Mobile and Sprint. 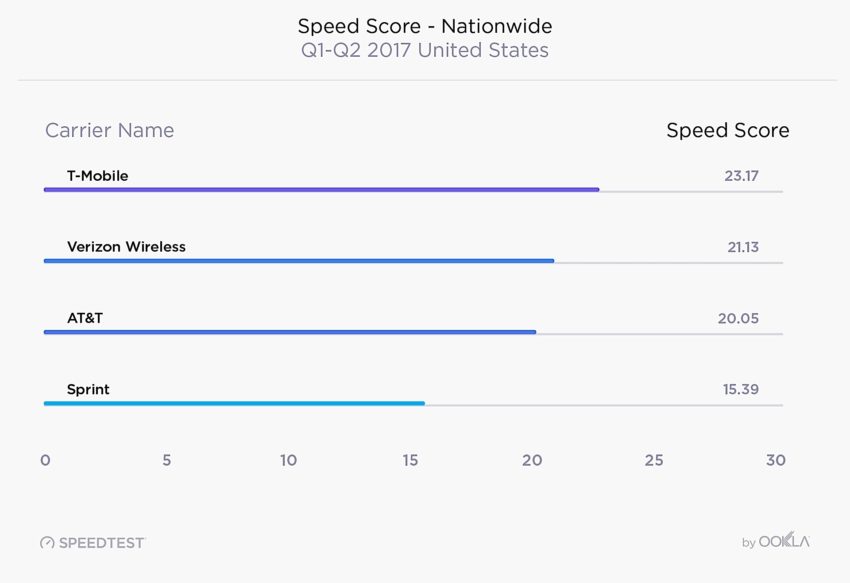 T-Mobile is the fastest carrier in the U.S.

The average mobile download speed in the U.S is 22.69 Mbps down and 8.51Mbps up. Upload speeds are up about 4% from 2016. When it comes to the fastest speeds, T-Mobile is the clear winner. Verizon is in second place , followed closely by AT&T. Sprint brings up the tail end with a noticeable difference in speed among the rest of the carriers.

Speedtest notes that T-Mobile is the fastest to roll out new advanced LTE features and states, “T-Mobile is in an excellent position to become the first all-LTE mobile carrier in the United States which will allow them to deliver voice and data more efficiently.”

What’s even more important the overall network speed is how fast popular devices are on the network. T-Mobile isn’t just the fastest, it’s also the fastest for the iPhone 7 and the Galaxy S7. Both of these devices beat the carrier average and come in faster than Verizon and AT&T who remain second and third. Sprint is in last place by a long shot.

The iPhone is faster on T-Mobile.

There is one area where your T-Mobile iPhone 8 might not stack up to Verizon and AT&T and that’s coverage. Verizon and AT&T both have better coverage in rural areas and. Ookla shares that among all carriers, “there’s a strict divide in the consistency customers in more populated areas can expect from their internet experience versus what those in rural areas can.” You can see the fastest carrier in each of the cities in the table below, which isn’t always T-Mobile. This will help you pick the best carrier for your location.

Ookla notes that unlimited data does not appear to be causing network problems, but there is an uptick in speed tests below 5 Mbps, which they believe signals AT&T and Verizon are reducing performance due to high and plan choices rather than overall network problems.