Apple’s replaced its iOS 11.0.1 update with a new iOS 11.0.2 update and the new firmware delivers key bug fixes for the iPhone 8 and iPhone 8 Plus.

Apple usually puts its iOS updates through beta testing, but the company’s rushed out the last two updates in order to fix iOS 11 problems on the iPhone, iPad, and iPod touch.

The iOS 11.0.1 update fixed serious issues with Exchange and Outlook and the iOS 11.0.2 update is focused on fixing annoying iPhone 8 problems and a few lingering iOS 11 issues.

If you’re coming to iOS 11.0.2 from an older version of iOS, your download will be larger (in some cases, substantially larger) because the features from the updates you skipped are baked in.

Our iOS 11.0.2 update guide goes over the most important things to know, right now, about the new iOS 11 update for iPhone, iPad, and iPod touch.

It includes our impressions of the iOS 11.0.2 update on the iPhone and iPad, a quick look at iOS 11.0.2 problems, the iOS 10 downgrade, and what to expect next from Apple.

Apple’s maintenance releases sometimes are just a few megabytes, but the iOS 11.0.2 update is much larger than your standard bug fixer.

The installation process will take you a little bit longer. iOS 11.0.2 took about five minutes to install on our iPhone 7 and you can expect the same if you’re currently running iOS 11.0.1.

We’ve only been using the iOS 11.0.2 update for a week now, and the update is, for the most part, holding up fine on the iPhone 7, iPhone 5s, and other iOS 11-powered devices.

We haven’t experienced any weird battery life drain. We didn’t see any on iOS 11.0.1 either. We’ve also managed to connect to Wi-Fi and Bluetooth devices. Cellular data also appears to be normal. We’re running the iPhone 7 on AT&T’s network.

As of right now, our core apps are stable. We haven’t experienced issues with Asana, Slack, Twitter, Spotify, Podcasts, YouTube, Gmail, or the Mail app. That could change down the road.

That said, you’ll want to be careful with iOS 11.0.2. New software, even small updates like iOS 11.0.2, can cause problems. Older devices like the iPhone 5s are particularly susceptible to performance problems. 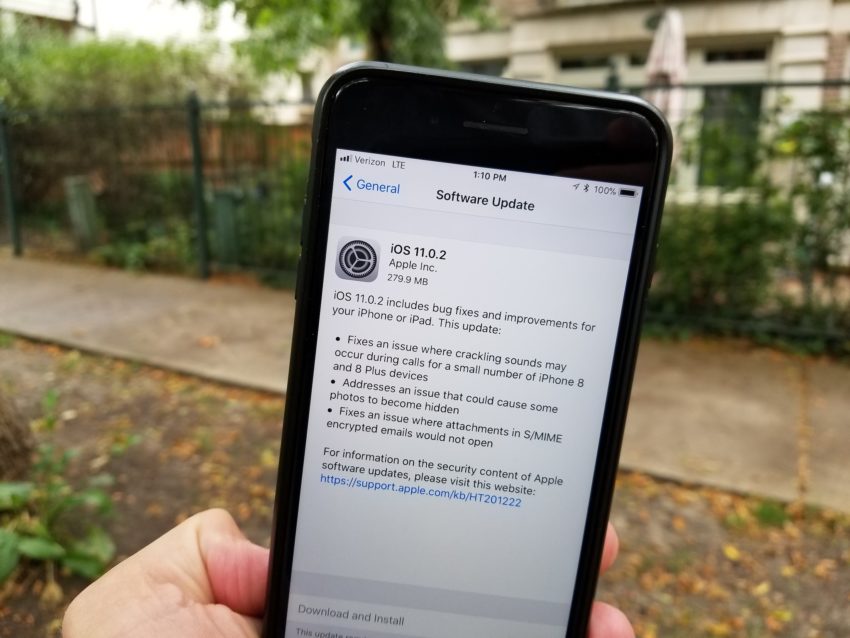 The iOS 11.0.2 change log notes that it comes with a fix for a crackling sound issue on the iPhone 8 and iPhone 8 Plus, a fix for a bug that could cause photos to become hidden, and a fix for an issue where attachments in S/MIME encrypted emails would not open.

While some iOS 11.0.2 users are having a good experience, others are running into trouble. Some of these issues are new, others carried over from the previous versions of iOS 11.

Apple’s also acknowledged an iOS 11 Reachability bug and it says it’s working on a fix in an upcoming version of iOS 11.

If you’re already noticing bugs or problems, take a look at our list of fixes for the most common iOS 11 problems. Our list should have you covered.

You might also want to take a look at our tips to improve iOS 11 performance and iOS 11 battery life. They will come in handy if you start noticing lag or weird battery drain.

If you can’t stand iOS 11.0.2’s performance on your device you can always downgrade.

Apple will, at some point, stop signing off on iOS 11.0.1 so those of you interested in downgrading will need to move pretty quickly.

Our guide will take you step-by-step through the downgrade process.

iOS 11.0.2 fixes some bugs, but there still are iOS 11 problems. We could see another iOS 11 update roll out in the near future though Apple hasn’t confirmed an iOS 11.0.3 release.

One thing we do know is that the company is planning to deliver an iOS 11.1 update. Apple recently released the second iOS 11.1 beta for iPhone, iPad, and iPod touch.

Apple hasn’t confirmed an iOS 11.1 release date, but it could arrive in late October with two brand new features for iPhone and iPad users.

It’s also planning to bring Unicode 10.0 and its new emoji characters to the iOS 11.1 keyboard. The list of new emojis includes a zombie, a genie, an elf, an exploding head, a mage, a coconut, a sandwich, and a vampire. The iOS 11.1 update will also bring back the 3D Touch App Switcher gesture.

4 Reasons Not to Install iOS 11.4.1 & 8 Reasons You Should
Related Topics:AppleiOSiOS 11iOS 11.0.2iPadiphoneTechnology