Apple continues to refine iOS 11 and its latest release delivers a long list of exciting changes including new emoji characters for the iOS keyboard, a fix for a Reachability dock overlap issue, the return of the 3D Touch App Switcher gesture, and a fix for a serious Wi-Fi vulnerability called KRACK (Key Reinstallation Attack).

If you’re upgrading to iOS 11 for the first time, you can expect a pretty substantial iOS 11.1 download.

The iOS 11.1 update is an exciting release, but we’re already hearing about problems. Some users are reporting iOS 11.1 installation issues, others are reporting immediate battery drain and issues connecting to Bluetooth devices.

The iOS 11.1 is the first iOS 11 milestone upgrade and that means iPhone, iPad and iPod touch owners are looking at a pretty significant download.

The download should only take you a few moments provided you’re connected to a high-speed Wi-Fi network. The installation will likely take between 5-10 minutes.

If you are updating from an older version of iOS 11 or iOS 10, your download size will be bigger and you installation could take a lot longer. For more on timing, take a look at our walkthrough. 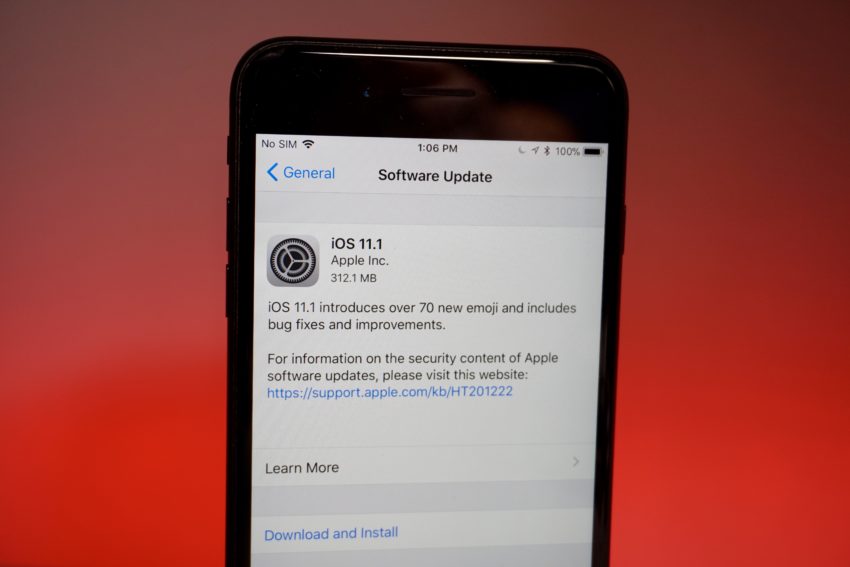 We’re currently running iOS 11.1 on the iPhone 8, iPhone 7, iPhone 7 Plus, iPhone 6s, and iPhone SE. We’ve only been using it for a few minutes, but here are a few thoughts about its performance.

We didn’t run into any installation issues on any of our devices. If you want to install the iOS 11.1 update right now, you should be able to do so without long download times.

Battery life is holding up right now. We haven’t noticed any weird battery drain on any of our iPhones. Connectivity (LTE, Bluetooth, Wi-Fi) is also strong.

We haven’t noticed a decline in app performance though it’s still very early. UI speed appears to be good across the board. We noticed a bit of keyboard lag on the iPhone SE, but it’s disappeared.

iOS 11.1 feels stable right now, but that could definitely change down the road and you’ll want to approach the update with caution.

If you need additional feedback about iOS 11.1 and iOS 11, take a look at our reasons to, and not to, install the iOS 11.1 update on your device right now.

We’re in the process of updating our mini iOS 11 reviews. Once they’re live, you’ll be able to find them here for the iPhone 7, iPhone 7 Plus, iPhone 6, iPhone 5s, iPhone SE, and the iPad Air 2, iPad Air, and iPad mini 2.

The iOS 11.1 update is more than just a collection of bug fixes and security patches. Apple’s latest iOS 11 update brings some new features to iOS 11 users.

The most exciting change for most iOS users are the new emoji characters. iOS 11.1 delivers more than 50 new emojis and also includes a long list of redesigned characters.

Unfortunately, only iOS 11.1 users can see these emojis. Friends and family on iOS 11.0.3 or below will see a series of lines or a rectangle with a question mark in place of the new emoji characters.

In addition, it comes with a fix for an annoying Reachability issue and it restores the 3D Touch App Switcher gesture that disappeared when Apple released iOS 11 in September. Those are just a few of the highlights, here’s Apple’s full iOS 11.1 change log: 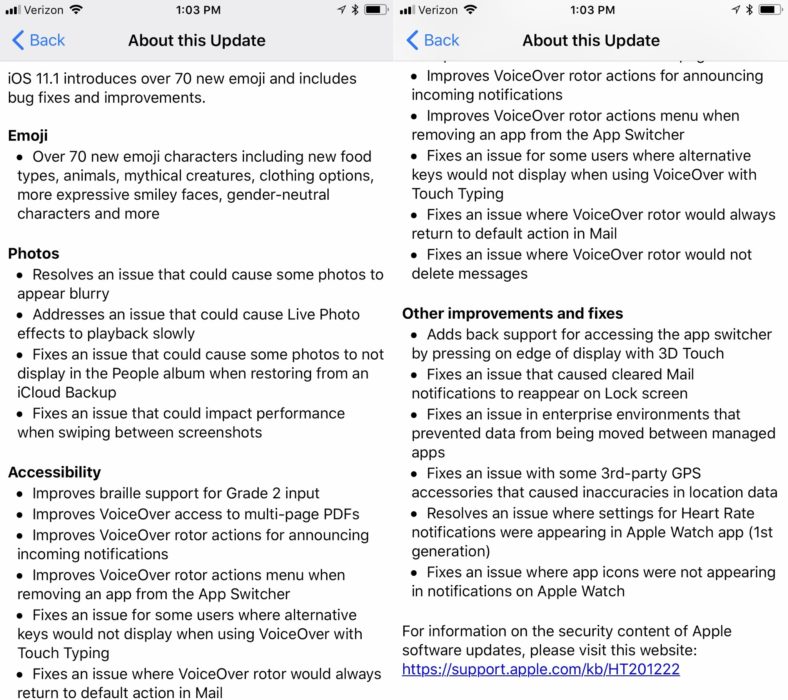 The iOS 11.1 update comes with a mix of features and fixes for iOS 11 problems.

The iOS 11.1 update fails to deliver the company’s new Apple Pay Cash program. Apple employees were testing the service on a special iOS 11.1 beta, but it looks like it still isn’t ready for primetime.

For more on iOS 11.1 and its changes, take a look at our in depth iOS 11 walkthrough. It’ll take you through the key differences between iOS 11.1 and the previous versions of iOS.

If you’re already noticing bugs or problems, take a look at our list of fixes for the most common iOS 11 problems. Our list covers abnormal battery drain, Bluetooth issues, and more.

You might also want to take a look at our tips to improve iOS 11 performance and iOS 11 battery life. These guides will come in handy if you start noticing lag or weird iOS 11.1 battery drain.

If the iOS 11.1 update starts acting up on your device, you can downgrade to an older version of iOS 11. 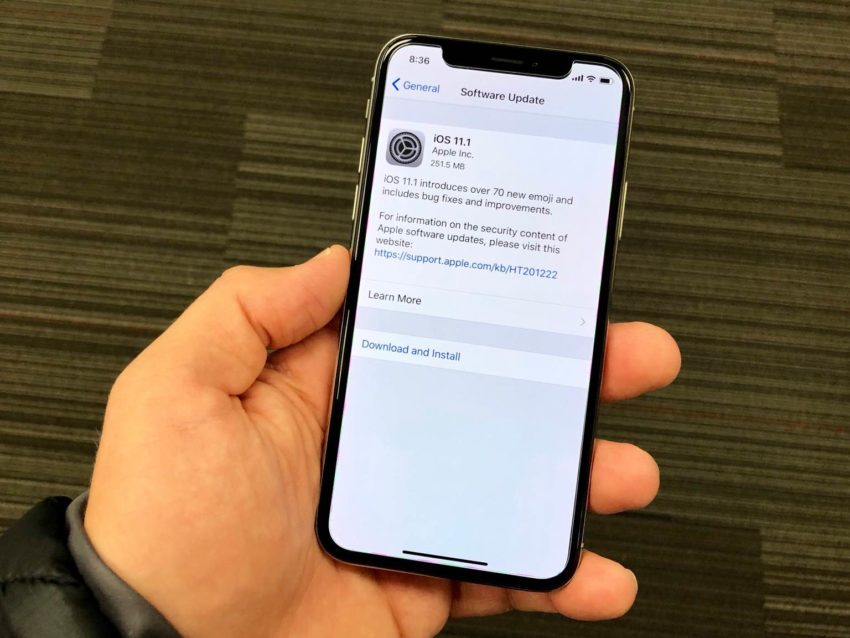 Apple’s closed off the iOS 11.0 and iOS 10 downgrades which means there’s no going back to iOS 10. If you’ve already moved your device to iOS 11, you’re stuck.

The company will stop signing off on iOS 11.0.1, iOS 11.0.2 and iOS 11.0.3 so those of you interested in downgrading will need to move quickly. Apple won’t make an announcement ahead of time and these loopholes could close at any time.

Our iOS 11.1 downgrade guide will take you step-by-step through the process.

The iOS 11.1 update fixes some of iOS 11’s more annoying issues, but it’s far from perfect. Unfortunately, it could be a few days before we get a new bug fix update from Apple.

An iOS 11.1.1 release is up in the air, but Apple will release an iOS 11.2 update for iPhone, iPad, and iPod touch. Apple recently released put its second milestone iOS 11 update into beta testing.

Apple hasn’t confirmed an iOS 11.2 release date, but it could arrive in December alongside the company’s new HomePod speaker.

The iOS 11.2 introduces SiriKit for the HomePod. It also includes performance improvements and bug fixes for lingering iOS 11 problems.

If you’re dealing with iOS 11 problems, be on the lookout for new iOS 11.2 betas as we push through the fall. Apple will likely tack on additional fixes and tweaks to the beta.

4 Reasons Not to Install iOS 11.4.1 & 8 Reasons You Should
Related Topics:AppleiOSiOS 11iOS 11.1iPadiphoneTechnology