Apple is rolling out the first update to its iOS 12 operating system and the iOS 12.0.1 update brings bug fixes for some of the problems plaguing the iPhone, iPad, and iPod touch.

After a bit of a wait, Apple’s finally rolling out a new version of iOS 12. Dubbed iOS 12.0.1, it’s a small maintenance release for all iPhone, iPad, and iPod touch models capable of running Apple’s new operating system.

The iOS 12 update is much smaller than the first version of iOS 12, but it’s still an important release. The update comes with several key bug fixes including one for a widespread iPhone XS charging issue.

In this guide to the iOS 12.0.1 update we’ll take you through the most important things you need to know as we push away from the release date.

If you’re currently running iOS 11, you can expect your download and installation to take a lot longer. The features, enhancements and fixes from iOS 12.0 are baked into your iOS 12.0.1 update. 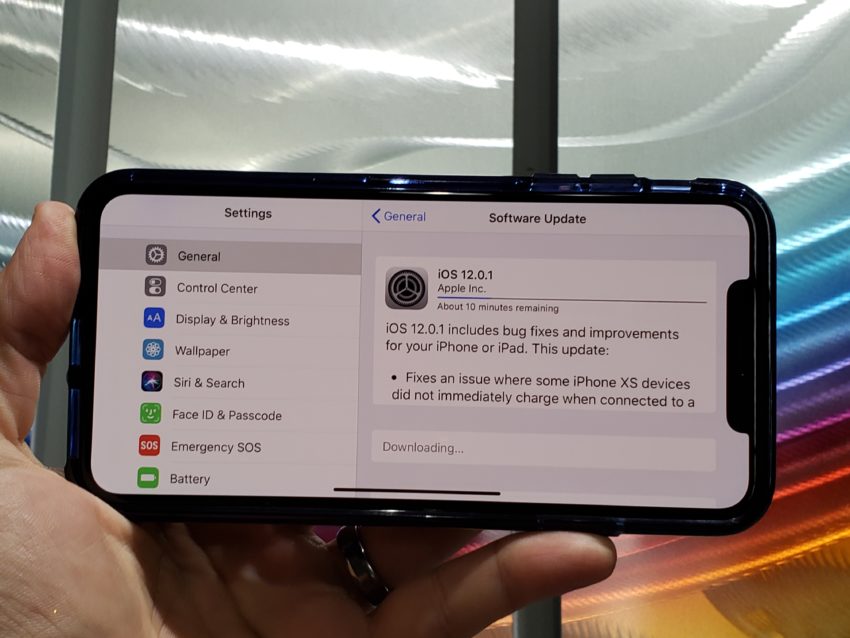 We’ve been using the iOS 12.0.1 update on a handful of devices for a few weeks now and here are some of our initial thoughts about iOS 12.0.1 and its performance.

If you’re dealing with iOS 12 problems you should install the iOS 12.0.1 update right now. If you’re having a good experience on the first version of iOS 12, you might want to hold out and wait for long-term feedback to emerge.

The iOS 12.0.1 update’s change log is small and comes with two security patches for potential lock screen exploits and a few bug fixes for iPhone XS and iOS 12 problems:

Note that a few highly anticipated iOS 12 features are missing.

Apple pulled its new Group FaceTime calls feature from the iOS 12 beta a few weeks ago, but the feature will arrive inside the iOS 12.1 update this fall.

Also missing are the new emoji characters Apple promised with iOS 12. The new emojis are also available in iOS 12.1 beta and will be released with the final version of the update this fall.

The iOS 12.0.1 update didn’t go through a beta and problems have slipped into the final release.

If you can’t stand iOS 12.0.1’s performance on your device you’re stuck until Apple rolls out a new version of iOS 12.

Apple’s no longer signing off on iOS 12.0 which means you can no longer downgrade your device to the previous version of iOS 12.

Unfortunately, there’s no way to drop back down to iOS 11 either.

Developers haven’t released a public iOS 12 jailbreak tool and it could be weeks before we see one.

As of right now, the only way you can jailbreak a device running iOS is if it’s running an older version of iOS 11. Unfortunately, there’s no way to downgrade to anything older than iOS 12.0.

We’ve seen an iOS 12 jailbreak proof of concept (and some fakes) emerge so those of you interested in jailbreaking your device should be on the lookout for fakes as we push through the year. We’ll probably see several more.

For now, jailbreak users need to skip iOS 12.0.1 and remain on earlier versions of iOS 11. For more on the jailbreak, take a look at our guide to the iOS 12 jailbreak.

The only known update in Apple’s pipeline right now is the iOS 12.1 update which is slated to launch sometime later this year. We expect it to debut in late October or early November.

The iOS 12.1 update is currently in beta for all iOS 12-powered devices and we expect it to deliver a nice mix of new features, bug fixes, and security patches.