The iOS 11 release date arrived in September, and the iOS 11.1 beta landed about a week later. We expect to see the iOS 11.1 release date closer to the iPhone X release in early November. You can jump into the final version of the software today even if you don’t pay $99 to join the Apple Developer program.

There are two iOS 11 beta programs available to users. The first iOS 11.1 beta comes to Apple Developers and the second comes to the public. The iOS 11.1 beta

To join the public iOS 11.1 beta you need to visit the Apple Beta program signup and log in with your Apple ID. You can register and join the beta which will open up later soon. If you are part of the public beta,  you should get the iOS 11.1 beta in the near future. 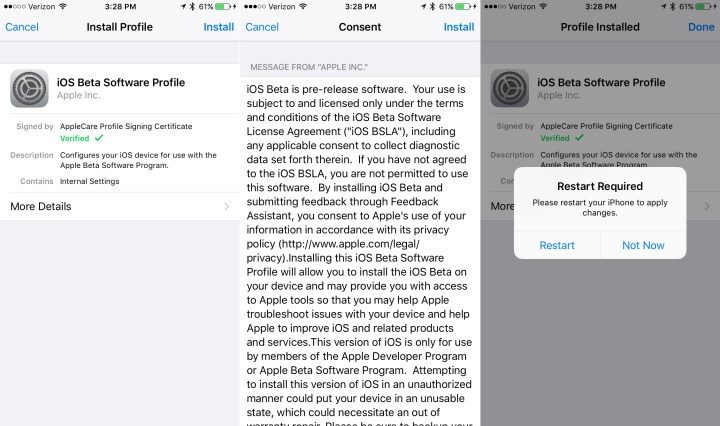 Install the iOS 11 Beta to your iPhone with the Developer Profile.

Download and install the iOS 11 Developer Profile. If you download it to your computer, you need to AirDrop it or Email it to your phone. When you open the file on your iPhone or iPad it will prompt you to install the profile to the phone. You will need to enter your passcode. If prompted, choose to install this on your iPhone, not on the Apple Watch.

Wait for the iPhone to reboot. Now go to Settings -> General -> Software Update. This will check for the iOS 11 beta download and if it is available the download will start. You need to connect to WiFi to download iOS 11.1 and you will need at least 50% battery life left.

Enter your passcode when prompted and wait for the iPhone or iPad to reboot. Once it comes back, you will be on the iOS 11.1 beta and you will be able to test the new iOS 11 features.