Apple’s released a new version of iOS 12 and the iOS 12.1.2 update is currently available for all iPhone, iPod, and iPod touch models capable of running iOS 12.

In a bit of a surprise, the company’ quickly pulled the iOS 12.1.2 update out of beta and released it for all iOS 12 users bringing additional bug fixes and changes to the mobile platform.

The iOS 12.1.2 is another point upgrade, but it contains important bug fixes for lingering iOS 12 problems on the iPhone XR, iPhone XS, and iPhone XS Max.

In this guide to the iOS 12.1.2 update we’ll take you through the most important things to know about the new firmware. Our walkthrough includes a quick look at iOS 12.1.2’s performance and download size, iOS 12.1.2 problems, the iOS 12 downgrade, and what’s next from Apple.

iOS 12.1.1 was a point upgrade but it required a significant chunk of space to download. iOS 12.1.2 is a much smaller release for the iPhone, iPad, and iPod touch.

If you’re running an older version of iOS 12 or if your device is still running iOS 11, you’re going to see a much bigger download size because you’ll get the features and fixes from the updates you skipped inside your version of iOS 12.1.2.

For more on the iOS 12.1.2 download and installation, take a look at our guide. 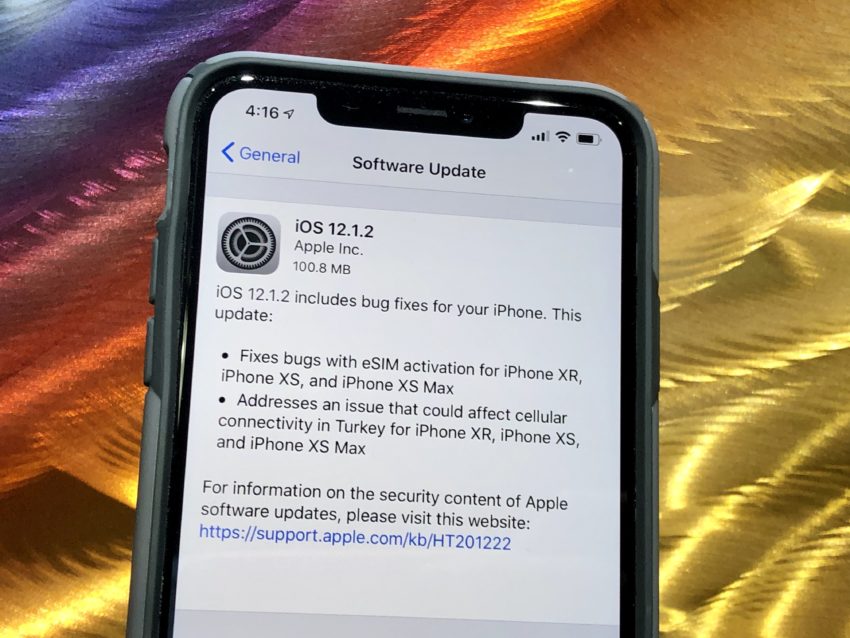 We’ve been using the iOS 12.1.2 update on a handful of devices for an extended period of time (we also used the iOS 12.1.2 beta) and here are our quick impressions of its performance:

If you’ve been dealing with bugs and performance issues you should think about installing iOS 12.1.2 in the near future. If you’re having a great experience on iOS 12.1.1 or an older version of iOS, you might want to wait for more long-term feedback to emerge.

If you need iOS 12.1.2 feedback right now, check out our reasons to, and not to, install the iOS 12.1.2 update on your iPhone, iPad, or iPod touch right now.

We’ve also published our iOS 12.1.2 reviews for the iPhone X, iPhone 8, iPhone 7, iPhone 6s, iPhone 6, iPhone 5s, and iPhone SE so take a look at those if you need more feedback about the update’s performance.

The iOS 12.1.2 update went through a short beta but we’re hearing about issues with the new software.

If you can’t stand the iOS 12.1.2 update’s performance on your device you can also try downgrading. Apple’s signing off on iOS 12.1.1 which means you can drop down to it iOS 12.1.2 gives you issues.

This option will close up soon so you’ll need to move quickly.

iOS 12.1.2 is a maintenance update which means it comes with bug fixes and under-the-hood improvements. It doesn’t have any security patches on board.

There’s also a new animation for force closing apps in China which you can see in the video below. Apple did this to address Qualcomm patents.

Developers digging through the beta discovered a few other changes. These included:

Apple’s released a new version of iOS 12.1.2 for the iPhone with build number 16C104″ (the original iOS 12.1.2 update is called “16C101”) though it’s unclear what the new build has on board. We assume there are bug fixes but Apple hasn’t released an updated change log.

Jailbreak developers haven’t released an iOS 12 jailbreak and it’s unclear if we’ll get one in 2019.

The only way you can jailbreak a device right now is if it’s running an older version of iOS 11. Unfortunately, there’s no way to downgrade to iOS 11.

For more on the iOS 12 jailbreak, check out our guide.

Apple’s confirmed an iOS 12.1.3 update and the software is in beta ahead of an unknown release date.

The company is currently on iOS 12.1.3 beta 2 which means an official release is likely coming sometime in early 2019.

If you’re struggling on iOS 12.1.2 or just want to give the new software a try before it’s officially released to the public, you can do so via the iOS 12.1.3 beta.

The iOS 12.1.3 beta is available for all devices capable of running iOS 12.