5 Things to Know About the iOS 12 Update

iOS 12 is finally out of beta and anyone with an iOS 11-powered phone or tablet can now install the new operating system on their device.

The iOS 12 update is obviously much bigger than Apple’s previous update (iOS 11.4.1) as it brings more than just a short list of bug fixes.

iOS 12 is the culmination of months of beta testing and work behind the scenes and Apple’s new software delivers an important set of changes including performance enhancements for older devices.

Owners of newer models will also see improvements including seeing sharing options two times faster and apps launching faster than they did on iOS 11.

With that in mind we want to take you through the most important things to know right now about iOS 12. This roundup includes a quick look at iOS 12’s known changes, iOS 12 problems, iOS 12’s performance, and what’s next for iOS 12 users.

The iOS 12 update is a huge download, 1GB+ for devices running iOS 11.4.1. Your download will likely be a bit bigger if you’re coming from an older version of iOS.

If your device is connected to a high-speed Wi-Fi network you should be able to pull the update in less than 10 minutes. We ran into long download times, but we also tried to pull the update the second it was released. If you wait a few hours you probably won’t run into the same issues. 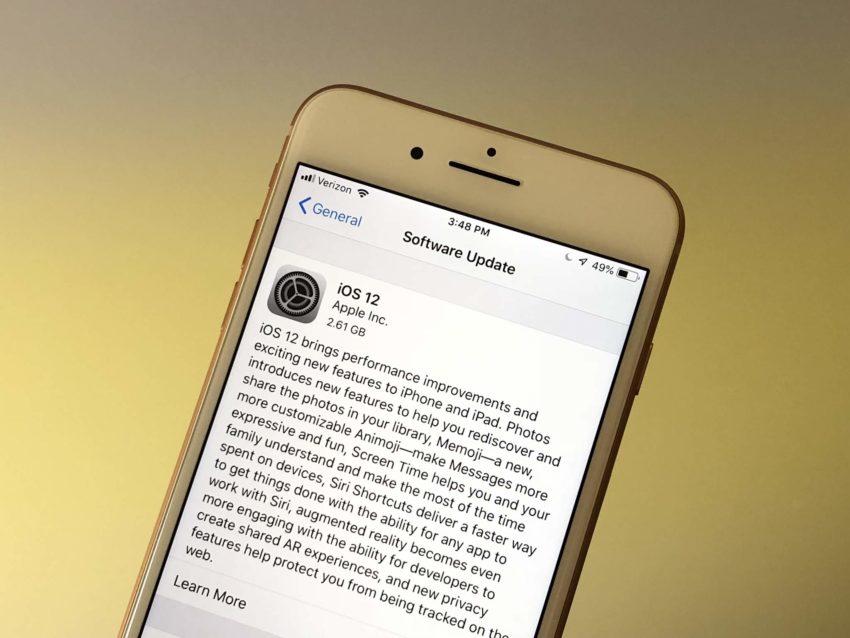 We’ve been using the iOS 12 update on a handful of devices for a little over a week now and here are our impressions of the update.

While many of you are should install the iOS 12 update right now, many others should hold out and wait for more long-term feedback to emerge. Major bugs and performance issues often emerge days, sometimes even weeks, after a major iOS update’s release.

If you need early iOS 12 feedback, take a look at our reasons to, and not to, install the iOS 12 update on your iPhone, iPad, or iPod touch.

We’ve published our quick iOS 12 reviews for the iPhone X, iPhone 7, iPhone 6s, iPhone 6, iPhone 5s, and iPhone SE and they’ll provide you with a little more feedback about the update.

iOS 12 is a new operating system which means it comes with a long list of changes. While many of you will be familiar with these changes from the iOS 12 beta, others are finding out about them for the first time today.

Here is Apple’s full iOS 12 change log. Highlights include the performance enhancements, Screen Time, the new Memojis and Animojis for the iPhone X, and Siri Shortcuts.

Other features and improvements

Note that a few highly touted features are missing.

Apple pulled its new Group FaceTime calls feature from the iOS 12 beta a few weeks ago, but says the feature will be released inside another iOS 12 update down the road, likely iOS 12.1.

Also missing are the new emoji characters Apple promised with iOS 12. We expect the new emojis to emerge inside a milestone upgrade, likely iOS 12.1 or iOS 12.2.

iOS 12 went through a lengthy beta, but the new software is causing problems for many iPhone, iPad, and iPod touch owners.

These are common right after an update is released and we expect many of them to subside once the rush to install iOS 12 is over.

If you’re noticing problems on your iPhone, iPad, or iPod touch you’ll want to take a look at our list of fixes for common iOS 12 problems.

If you can’t stand iOS 12’s performance on your device you can drop back down to iOS 11 for a limited time.

Apple’s currently signing off on iOS 11.4.1 which means you can downgrade your device to the previous version if you aren’t happy with your move to iOS 12.

This is the only downgrade option available. You can’t drop down to iOS 11.4 or any older version of iOS.

Unsurprisingly, we haven’t seen a public iOS 12 jailbreak tool go live and it could be weeks before we see one released to the general public.

Developers have managed to jailbreak iOS 12, but there’s no telling when, or even if, they’ll release a tool to the public.

For now, jailbreak users need to skip iOS 12 and remain on earlier versions of iOS 11.

iOS 12.0 is just the first of what should be a long list of iOS 12 updates for iPhone, iPad, and iPod touch models.

Apple hasn’t confirmed iOS 12.0.1 yet, but we expect the company to roll out the first bug fix update in September to alleviate some of the initial problems plaguing iOS 12 users.

iOS 12.0.1 is in the shadows, but the company’s confirmed an iOS 12.1 milestone update for release later this year.

iOS 12.1 is currently in beta for all iOS 12-powered devices and we expect it to deliver a nice mix of new features, bug fixes, and security patches.

For more on iOS 12.1, please check out our guide. It will lead you through everything you need to know about Apple’s next upgrade.