Apple’s pushed an iOS 12.1.4 update to iPhone, iPad, and iPod touch users and the new version of iOS 12 comes with a fix for a major FaceTime flaw.

The company promised a quick fix for the FaceTime eavesdropping bug and it delivered. iOS 12.1.4 update is available right now and it’s available for all devices capable of running iOS 12.

iOS 12.1.4 is a tiny maintenance release which means it doesn’t come with much of a change log. If you’re moving up from iOS 12.1.3 you get four security patches. There aren’t any new features on board.

If you’re moving your device from iOS 12.1.3, your download should be right around 90MB. iOS 12.1.4 is a 89.6MB download for iPhone X owners and it should be around the same for other devices.

Installing iOS 12.1.4 shouldn’t take you more than 5-10 minutes to complete if you’re moving your device from iOS 12.1.3. It took about five minutes to install on Apple’s iPhone X.

For more on the iOS 12.1.4 download and installation, take a look at our guide. 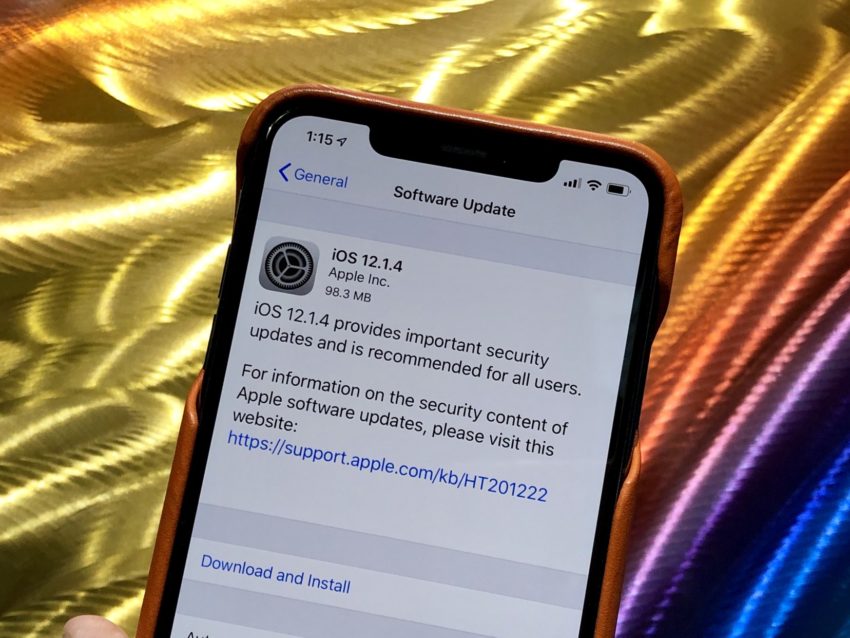 We’ve been using the iOS 12.1.4 update on several devices for an extended period of time and here are our quick impressions:

If you want help making a decision, check out our reasons to, and not to, install the iOS 12.1.4 update on your iPhone, iPad, or iPod touch right now.

If you’re having a good experience on iOS 12.1.3 or another version of iOS, you should dig into additional feedback about iOS 12.1.4’s performance.

iOS 12.1.4 users are complaining about a variety of bugs and performance issues.

Apple’s aware of the issue, but it’s unclear when it will release a fix.

Hey @AppleSupport, I've got a new iPhone (less than 6 months old) and the battery life was great. Software update iOS 12.1.4 was pushed to my device a few days ago and now suddenly my battery drains like CRAZY! What's going on? Battery consumption has near tripled! This is bad.

If you can’t stand the iOS 12.1.4 update’s performance on your device, you’re stuck until the next version of iOS 12 rolls out. Apple stopped signing off on iOS 12.1.3 which means you can no longer downgrade to the previous version of iOS 12.

Apple was forced to rush the iOS 12.1.4 update out so the change log is extremely short. It’s focused on fixing the issues with the company’s FaceTime service.

If you’re unfamiliar, the bug lets you call someone via FaceTime and hear the audio coming from their phone before they pick up the phone. That’s obviously a huge privacy issue.

Apple says iOS 12.1.4 takes care of this problem and the update is required if you want to continue using iOS 12’s Group FaceTime feature on your device.

Group FaceTime is permanently disabled on iOS 12.1-12.1.3 so if you want to continue using the feature you’ll need to upgrade your device.

iOS 12.1.4 comes with a few additional security patches and you can read about them here. Again, it doesn’t bring any new features to the iPhone, iPad, or iPod touch.

Jailbreak developers still haven’t released an iOS 12 jailbreak and it’s unclear if we’ll get one.

The only way you can jailbreak a device right now is if it’s running an older version of iOS 11. Sadly, there’s no way to downgrade to iOS 11.

Jailbreak developers typically haven’t confirmed anything for iOS 12.1.4 so iPhone and iPad users should avoid the update until we have more clarity.

For more on the iOS 12 jailbreak, check out our guide.

The next version of iOS 12 will likely be a milestone upgrade.

Apple’s confirmed a massive iOS 12.2 update and the software is in beta ahead of a release later this year, probably sometime in late March.

The iOS 12.2 update is a milestone release which means it will carry more than just bug fixes and patches. You can expect new features as well.

The iOS 12.2 beta is available for all devices capable of running iOS 12.