Apple’s released an iOS 13.4.1 update and the point upgrade brings a couple of bug fixes including an important fix for a FaceTime issue.

Like most maintenance upgrades, iOS 13.4.1 is a small release with a very short change log. It doesn’t have any new features on board.

With all of that in mind, we want to take you through everything there is to know about the latest update for the iPhone and iOS 13.

In this guide to iOS 13.4.1 we’ll take you through iOS 13.4.1’s performance, the current list of iOS 13.4.1 problems, the best places to find feedback about bugs and performance issues, the iOS 13.4.1 jailbreak status, and more.

We’ll start with our impressions of iOS 13.4.1 update’s performance on iPhone.

If your iPhone is running iOS 13.4 right now you’ll see a rather small download. The iOS 13.4.1 update is a 109.9 MB download for the iPhone X and it’s around the same for other versions of the iPhone.

If you’re running an older version of iOS 13 on your phone you’ll more than likely see a larger download size because your iOS 13.4.1 update includes the changes from any iOS updates you skipped.

If your phone is on iOS 13.4, the iOS 13.4.1 installation shouldn’t take more than 10 minutes to complete. It took about seven minutes to install on the iPhone X.

For more on the iOS 13.4.1 download and installation, take a look at our guide. 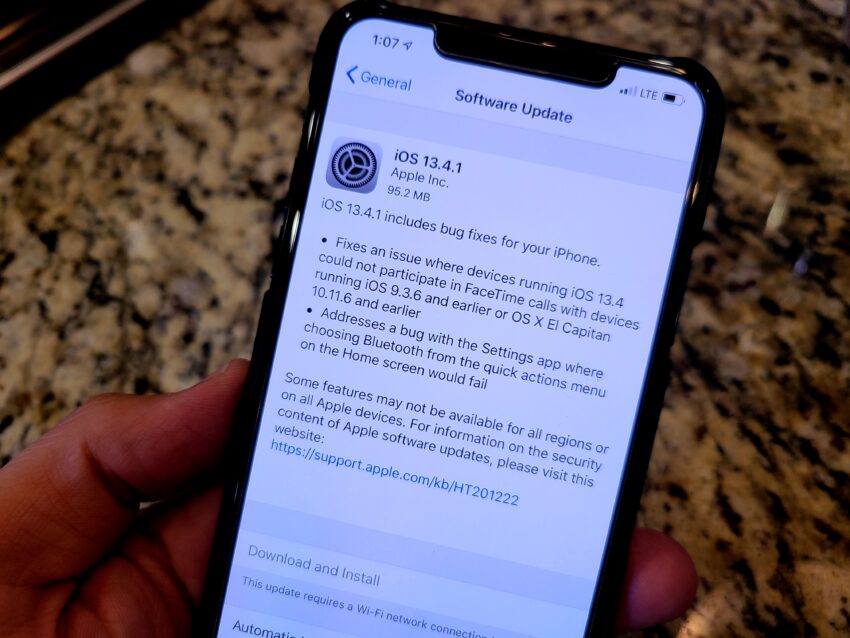 We’ve been using the iOS 13.4.1 update on the iPhone for several weeks now and here’s what we’ve discovered about its performance:

If your iPhone is struggling on iOS 13.4 or an older version of iOS 13, you might want to go ahead and install the iOS 13.4.1 update right now.

If you need help making a decision, please check out our reasons to, and not to, install the iOS 13.4.1 update. It’ll help you make a decision.

We’ve also published our mini iOS 13.4.1 reviews for the iPhone 11, iPhone SE 2, iPhone XS, iPhone XR, iPhone X, iPhone 8, iPhone 7, iPhone 6s, and iPhone SE so make sure you check those for additional feedback if you need it.

iOS 13.4.1 is causing problems for some iPhone users. Some of the problems are brand new while others have carried over from older versions of iOS.

On top of that there are two security vulnerabilities impacting the company’s Mail application. The issues, outlined by Motherboard, let attackers modify and delete email messages.

The zero-day hack is reportedly present in all versions of iOS between iOS 6 and iOS 13.4.1. Fortunately, it looks like fixes are on the way inside Apple’s upcoming iOS 13.5 update.

If you run into an issue on iOS 13.4.1, have a look at our list of fixes for the most common iOS 13 problems. We’ve also released some tips that could help you improve your phone’s performance and some tips to help fix bad iOS 13 battery life.

If you can’t handle the iOS 13.4.1 update’s performance, note that you can no longer downgrade.

Apple has stopped signing on iOS 13.4 and below which means you can’t move your phone back to an older version of iOS in an effort to improve its performance. Keep that in mind before you install iOS 13.4.1 on your phone.

If your phone is really struggling, you can try moving it to the iOS 13.5 beta.

iOS 13.4.1 is much smaller than iOS 13.4 and it brings two bug fixes to the iPhone. One is for the Settings app, another is for a FaceTime bug that was discovered a few days ago.

The current jailbreak tool supports iOS 13.4 and iOS 13.4.1 though it’s only available for select iPhone models.

We don’t have a specific release date to look forward to right now, but we do expect a release as soon as tomorrow. If you don’t want to wait, you can download the iOS 13.5 beta onto your iPhone right now.

Apple’s also hard at work on iOS 14 and we expect the company to push the software into beta in June shortly after the conclusion of its WWDC 2020 keynote.