The Apple Watch is an iPhone accessory, so you will need an iPhone for this to work and it doesn’t do much when it isn’t connected to your iPhone, but it will play music directly to Bluetooth headphones without your iPhone, which means it is a tempting workout accessory for users who want to leave the iPhone at home.

Here are the five most important things you need to know about the Apple Watch Sport vs Apple Watch right now.

The Apple Watch price starts at $349, but there is some debate over which model that price is linked to. On stage during the iPhone 6 event in September 2014 Tim Cook first announced the watch and shared the Apple Watch Price and the three models. During this event Cook only shared a single price. On stage Tim Cook states, “Apple Watch starts at only $349.”

The Apple Watch price starts at $349, but is that the cheapest model?

In the Apple Watch press release Apple states, “Apple Watch will be available in early 2015 starting at $349 (US).” None of these statements references a specific Apple Watch model.

We’ll have to wait for the Apple Watch event before we get a firm answer on this, but you will be able to buy at least one for this price.

The Apple Watch Sport and Apple Watch will both offer the same size options, the Digital Crown and the option to switch watch bands, but they are made of different materials.

The Apple Watch is available in big and small.

The Apple Watch Sport is made of a lightweight anodized aluminum in solver or space gray. Apple covers the display in Ion-X glass and users strap it to their hand with a fluoroelastomer band in one of five colors.

Apple delivers a higher-end look and feel with the Apple Watch. The Apple Watch features a stainless steel or space black stainless steel material for the actual watch material and a Sapphire screen cover. Options include leather bands, a link bracelet, a Milanese loop and a fluoroelastomer band option.

Sapphire is stronger than glass when it comes to preventing scratches, and stainless steel should also hold up better than aluminum over time. The Apple Watch Sport weighs 30% less than the Apple Watch with stainless steel, and Apple claims the aluminum is 60% stronger than traditional alloys, so it may be able to hold its own. Apple boasts that the specific Apple Watch steel is stronger and cold forged to make it, “less susceptible to nicks and scratches.”

The Apple Watch sizes are 38mm and 42mm, which offer a small and a large option of each version so that users can pick the one that fits their wrist. 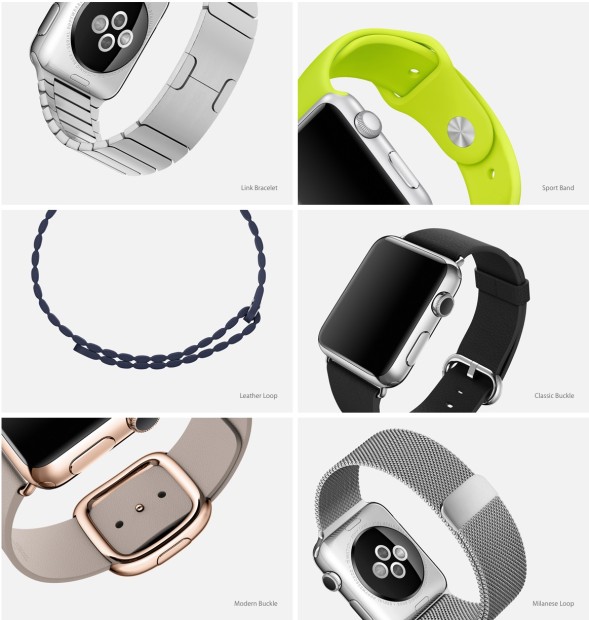 There are many Apple Watch bands.

The Apple Watch includes a Sport band option, and both of these models offer the option to remove a band with the push of a button, so there is hope that you will be able to buy a new band to make the Apple Watch Sport look nicer when you need something without a rubber band.

We are already seeing an Apple Watch band adapter to use regular bands with the Apple Watch, as reported by MacRumors, but Apple may try to limit third-party options and accessories.

Count on seeing all of the models in store on the Apple Watch release date. Lewis Tse Pui Lung / Shutterstock.com

We expect to see all the Apple Watch models available on the same day, but depending on demand you may have trouble finding some of the most popular, or most affordable options.