Here’s a look at what’s new in watchOS 5. This is the new version of Apple Watch software coming to most Apple Watches next week. Here’s a rundown of the most exciting new Apple Watch features. This greatly expands what the Apple Watch can do.

This is the first Apple Watch update that will not come to all devices. The first gen Apple Watch will not run watchOS 5. If you like these new features, you should consider upgrading to the Apple Watch 4,

Here’s a look at the new Apple Watch upgrades that are coming to your wrist with watchOS 5. 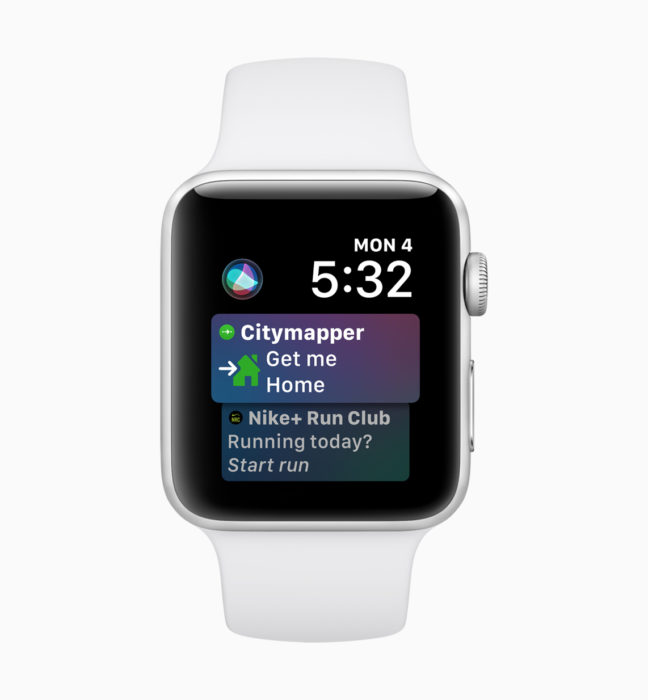 With watchOS 5, you no longer need to say Hey, to use Siri. Just raise your wrist and say Siri’s name. That makes using Siri easier on the go, and more natural.

Apple also upgrades the Siri watchface. It now uses machine learning to better know what you need at the right time. This can be a playlist or it might be one of the new Siri Shortcuts you’ll be able to make in iOS 12.

The watchface also pulls in information from other apps, so you’ll see more than just the Apple info you’re used to on watchOS 4.

The new Walkie Talkie feature allows you to have quick snippets of conversation with other Apple Watch users without having a full on real time conversation. It’s like voice iMessages and Apple calls this Walkie-Talkie.

They are pitching it as a handy way to connect with people at a concert, an outing or when you want to talk instead of type, but not have a full conversation that you both have to be present for the whole time.

This is a feature we can’t wait to test out, and can see it being handy when trying to track someone down at a show or conference. 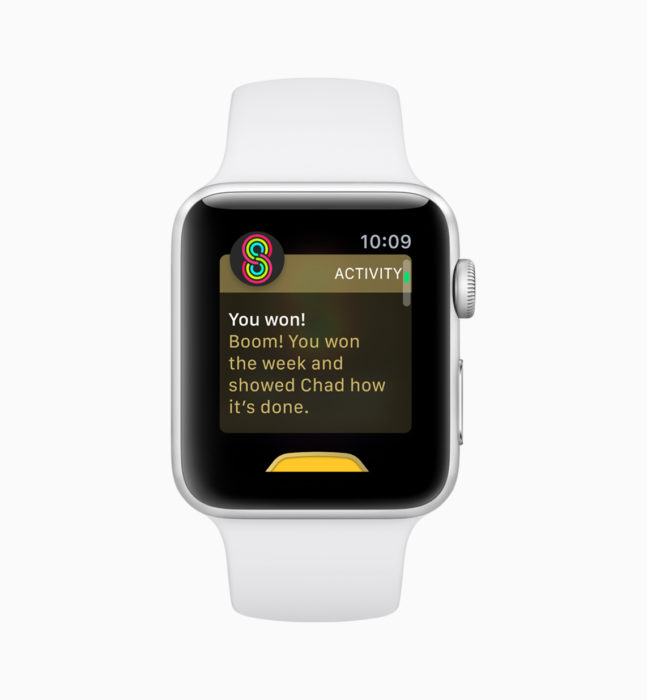 Compete with friends on watchOS 5.

If you share your activity with other Apple Watch users, you can now set up Activity Competitions. This allows you to put your friends on notice with a 7 day challenge to close your rings.

You’ll get alerts to help you stay on task and coaching so you know what you need to do to get ahead. At any point during the competition you can see who is ahead right from the watch. 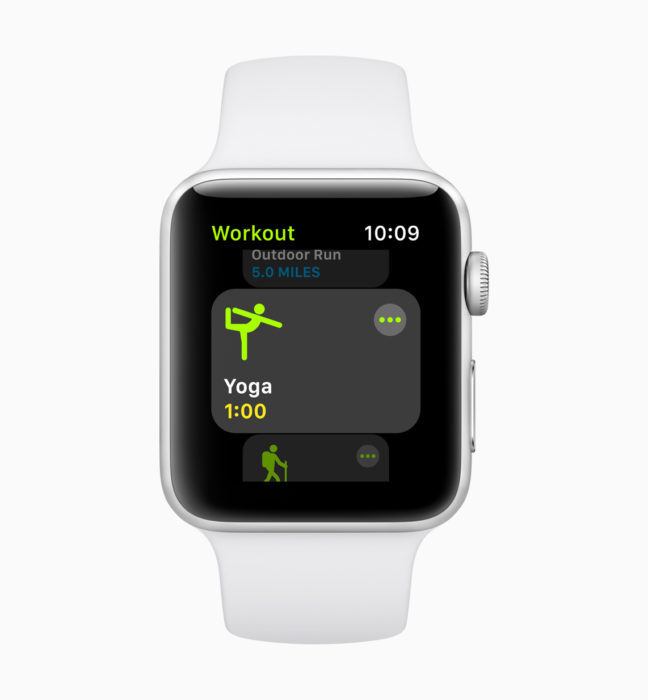 Track many new workouts on watchOS 5.

Apple is going big on exercise tracking in watchOS 5 with new workouts and improvements to existing ones designed to cater to more serious runners.

Your Apple Watch will now automatically track a workout if it detects one is in motion. The watch will then prompt you to star the workout and give you progress based on the movement you’ve already completed.

There is a new Yoga workout mode that will help you track calorie burn and other metrics. A new Hiking workout tracks elevation as you walk, and you’ll get better calorie tracking for tackling hills on watchOS 5.

For power runners you will now see your Pace and how far off from it you are. You will also see a rolling mile pace and your Cadence so that you can run with the best efficiency.

Podcasts on Your Apple Watch 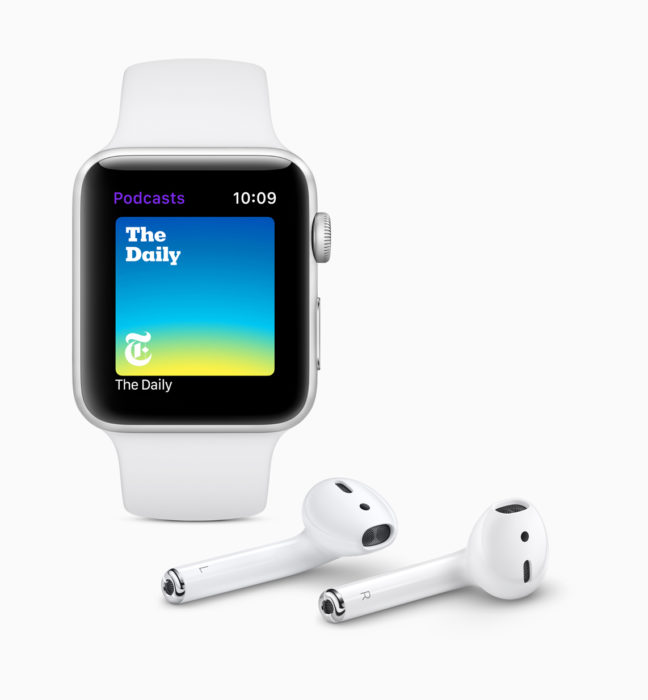 Listen to podcasts right from your Apple Watch.

Apple finally adds the Podcasts app to the Apple Watch so you can listen to your favorite podcasts directly on your watch, without your phone on hand. Podcasts sync automatically so that you have episodes ready when you are ready to listen. You can use Siri to search for new shows and start streaming them straight from the Apple Watch.

Apple upgrades Apple Watch notifications on watchOS 5 so that you can do more with a notification. For example, a notification about a flight will allow you to check in right from your watch.

The notifications for an app are also grouped so you can see more information without scrolling and scrolling.

A huge option is to see web content on your Apple Watch. If someone sends you a link, you can see a small version optimized for the Apple Watch by tapping the link , instead of grabbing your phone. 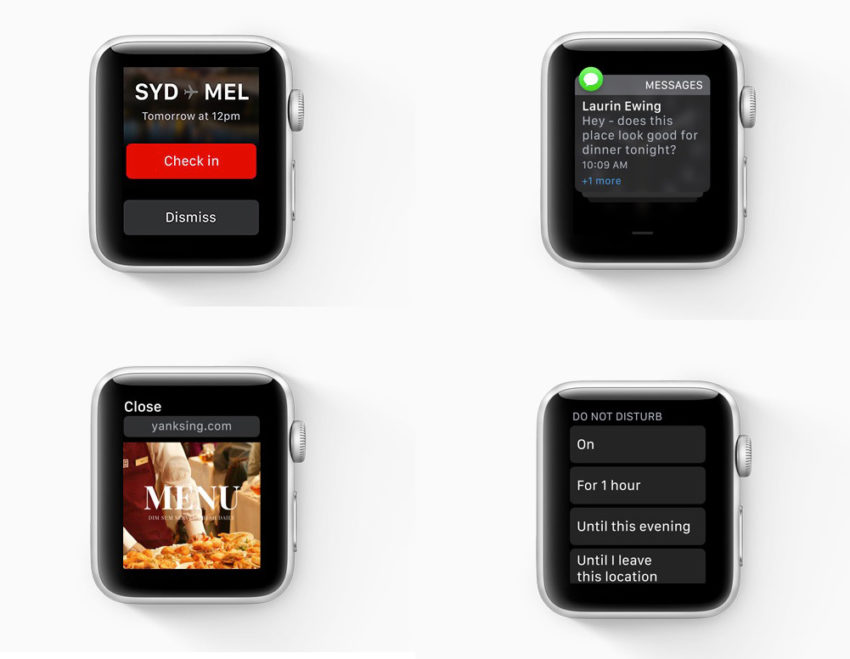 Better notifications and improved Do Not Disturb are part of watchOS 5.

Enhanced Do Not Disturb for Apple Watch

Apple is making Do Not Disturb a bigger part of watchOS and iOS 12. Now you can set Do Not Disturb on your Apple Watch for a specific time, until a change in time (like this evening or this afternoon) or when you leave a location.

This is a huge benefit since even with my parred down notifications I still get too many alerts on my Apple Watch at times. Hopefully this also brings Do Not Disturb for messages to the Apple Watch. This feature doesn’t work on watchOS 4.

Student ID on Your Apple Watch 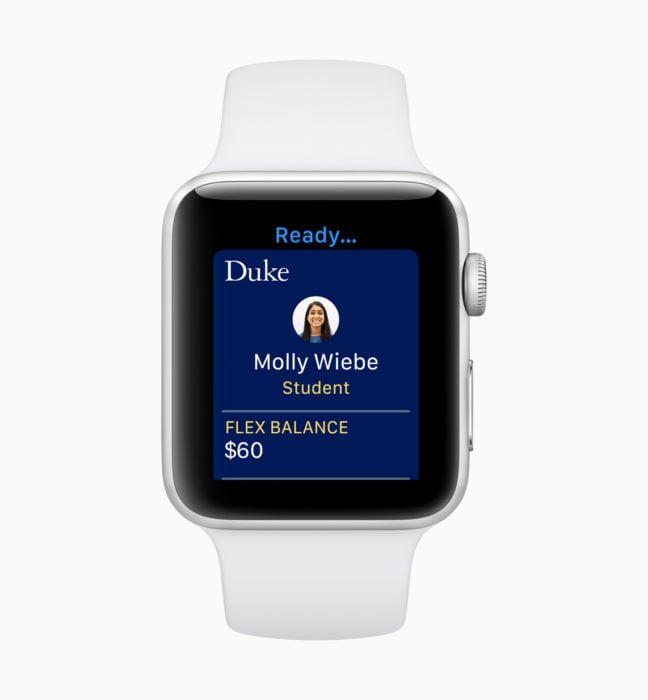 Carry your Student ID on your Apple Watch.

Apple supports Student ID cards on the Apple Watch as part of Wallet. This is rolling out to several universities and will allow you to get into the dorm, gym, library and campus buildings with your watch. At some schools it will also let you pay for snacks, do laundry or use the dining services.