The OULUOQI Nike+ watch band on Amazon is under $20 and after using it for over a month it’s clearly an amazing Apple Watch Nike+ band replacement option. 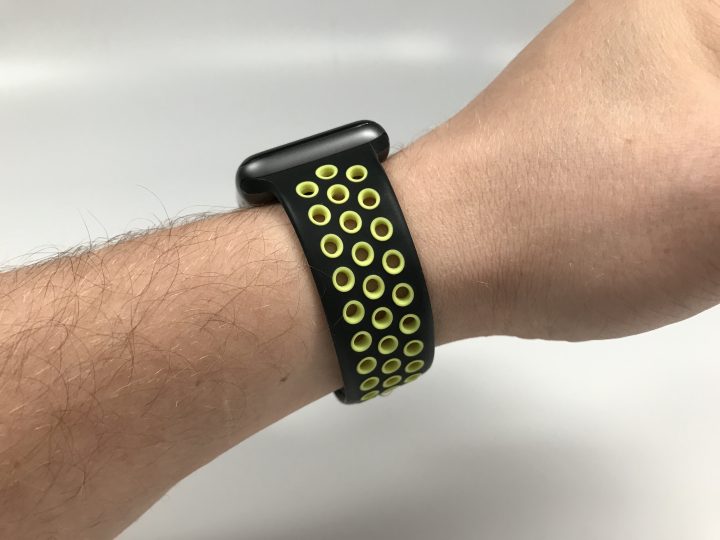 This is an awesome Apple Watch Nike+ watch band replacement.

The OULUOQI black and volt color option looks almost identical to the official Apple Watch Nike+ band. When people see my watch, most think that it is the Nike+ version of the watch.

Typically Apple Watch band alternatives, especially those that attempt to replicate the look of an official band, fail the test of time. The little things that make a band comfortable might not be there and the fit and feel of the band can degrade quickly.

That’s not the case with the OULUOQI Nike+ Apple Watch band replacement. This band is made of soft silicon and after a month of use the band feels just as good as it did on day one. Although available at a fraction of the cost of an official Apple Watch band, this is as soft and pliable as the official Apple Silicon sports bands.

It uses the same sport band style clasp, and even with taking the watch on and off close to 100 times during this review period the clasp stays securely in place and the watch band opening is the same size. The ventilation openings are a nice touch and I prefer this to the standard Apple Watch Sport band.

Another positive is that this band doesn’t warp to the curves of your wrist like the official Apple Watch bands do. There is also no discoloration to the bright yellow (volt) color after heavy use. By far this is my favorite Apple Watch band, and it’s the best Apple Watch Nike+ watch band for the money.