Online privacy and net neutrality are major concerns for users of all ages, but for millennials Facebook is the biggest concern for online privacy, outranking internet service providers, Google, the NSA and Amazon. By comparison, users 35 to 44 rate Amazon as a big threat to online privacy.

This information comes from PCMag, who recently surveyed 1,000 U.S. Consumers about online privacy and net neutrality. The survey found that 46% of Americans agree with net neutrality, while 32% of respondents don’t know what it is. A shocking 35% of millenniasl aren’t aware of what it is.

The FCC recently repealed net neutrality rules, which allows the company you pay for Internet access to start charging you different fees for different content to be delivered faster. While most ISPs say they are looking out for the user, the ever-increasing cable bills and shady blocking of specific websites, leaves little trust. 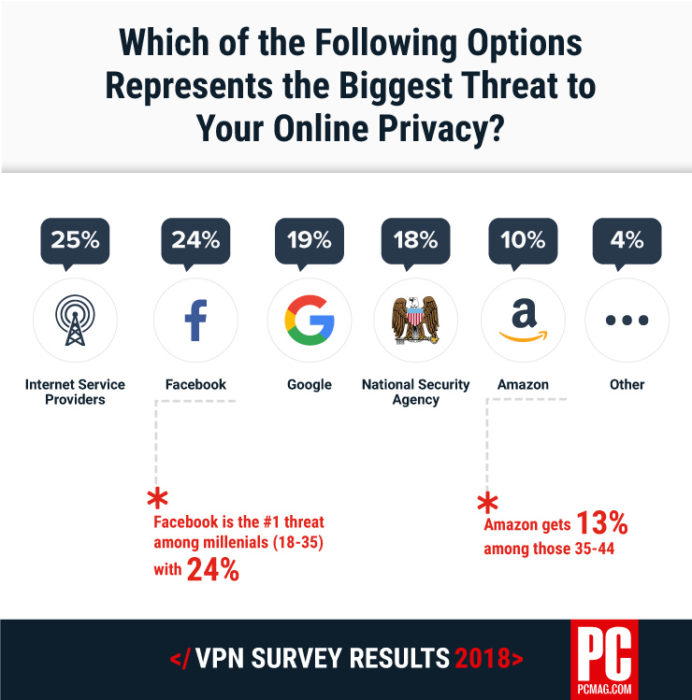 Most respondents chose their ISP as the biggest threat to privacy. the company that connects you to the internet can see what traffic your connection is using and where you go on the internet. While millennials worry more about Facebook, there is something you can do to hide your traffic from your ISP. It’s tougher to hide from Facebook, unless you simply avoid using the service, which is something more people are doing.

If you want to prevent your ISP from slowing down your traffic and potentially charging you more once the current rules end on April 23rd, you may want to use a VPN. A VPN is a virtual private network that can obscure the traffic around the tollbooths that the ISP sets up. Can a VPN save your online privacy and keep your online video streaming fast without extra fees? There is a chance, although Netflix blocks most VPNs there are still a number of services that work with Netflix

“Depending on how ISPs respond to a newly deregulated environment, a VPN could tunnel traffic past any choke points or blockades. That said, an obvious response would be to block or throttle all VPN traffic. We’ll have to see how this plays out,” explains Max Eddy, software analyst focusing on digital security and privacy. Eddy has tested more than 50 VPN services at PCMag Labs.

It remains to be seen what ISPs will do and if they will limit or charge for traffic routed through a VPN, but if you are interested you can check out more on how a VPN works and how to pick a VPN for your device.

65 Exciting Things You Can Do With the Apple Watch
Related Topics:AmazonfacebookMillenialsmillennialsOnline PrivacyprivacyTechnologyVPN