In 2011, Bethesda released Skyrim, an open-world RPG that was set two hundred years after the events in Elder Scrolls IV: Oblivion.

Last year, Bethesda told gamers that it got Skyrim running on the Xbox One but that it only did so as a technical exercise. At the time, Howard told the publication that fans of Skyrim and the Elder Scrolls series shouldn’t get their hopes up “yet.”

With that in mind, we want to take a look at everything we know right now about the Skyrim Special Edition, the big changes and its upcoming release date.

We’ll continue to update this roundup with new details as we approach the game’s release so check back frequently.

Skyrim for PS4 & Xbox One

As expected, the Skyrim remaster will be available for Xbox One, PlayStation 4 and Windows PC. Next year, it should head to the new Nintendo Switch but Bethesda hasn’t confirmed it outright. It won’t be released for the PS3, Xbox 360, or Nintendo’s Wii U. 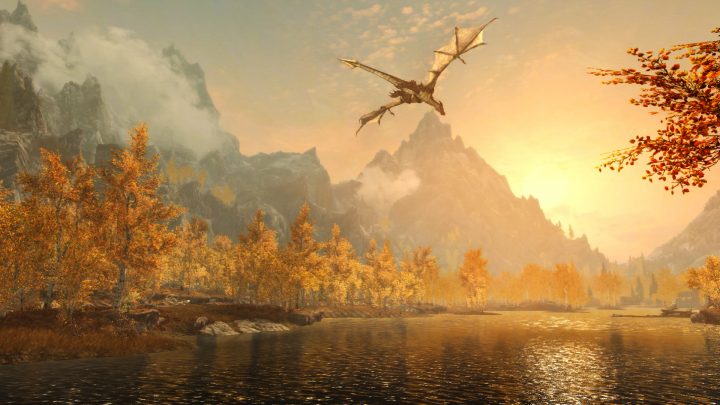 Bethesda says that “if you own the PC version of Skyrim and all its add-ons – Dawnguard, Hearthfire and Dragonborn – on Steam, you’ll get a free upgrade to Skyrim Special Edition” when it releases later this year. The same applies to anyone who owns Skyrim Legendary Edition on Steam.

Steam has started adding the game to the libraries of those who own the game and all of the DLC. The process will take some time:

We have started added Skyrim Special Edition to the libraries of customers who own Skyrim and all of its add-ons, and opened the game for pre-load for those users. Unfortunately, the process of adding the game to people’s accounts is going a bit slower than we originally anticipated. If you already own Skyrim and all the DLC but you aren’t seeing Special Edition in your Steam Library, don’t panic! We should have it added to everyone’s accounts within the next 24 hours, and then we will continue adding it to people who complete their collection in batches as we approach the Special Edition launch on Thursday.

Steam is currently offering a discount on the regular version of The Elder Scrolls V: Skyrim and all of its add-ons noting that you’ll get the Special Edition version of Skyrim for PC when the game arrives later this year.

There won’t be any such discount for those who own the game for Xbox 360 and/or PS3, it seems. Skyrim owners on Xbox 360 and PS3 will have to pay full price for a copy of the game.

I have confirmed repeatedly that it will not. PC is the same platform as previous version, Xbox One is a new platform.

The Skyrim remaster will also come with all of the DLC add-ons Bethesda released after the game’s arrival in November of 2011.

Bethesda released three pieces of paid Skyrim DLC including Dawnguard, Hearthfire, and Dragonborn. The last of these, Dragonborn, was released in late 2012 for Xbox 360 and early 2013 for the PS3 and Windows PC.

The developer says that all of the DLC will be integrated into Skyrim Special Edition so you most likely won’t have to download several different files to jump into the game and its DLC content.

Unfortunately, the old DLC will be it. The company says that it won’t be making any new Skyrim DLC for PC, Xbox One, and PlayStation 4 so you’ll need to rely on developers and Skyrim mods to alter your game down the road.

Bethesda’s Todd Howard also confirms that Skyrim saves on PC should transfer to the new version of the game. If you’ve used mods with your Skyrim saves, it might not be as straightforward. We’ll know more once the game arrives.

it's not something that happens "in game". If you move them over, they should work. But w mod use it's hard to be definitive

That’s obviously big for those that invested a ton of time in the open-world RPG. Unfortunately game saves will not transfer from Xbox 360 to Xbox One or PS3 to PS4.

A few other notes: 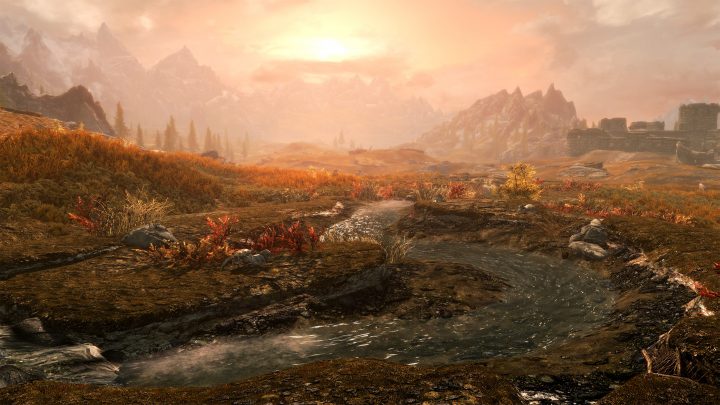 Best Buy is offering an exclusive Skyrim Special Edition Dragonborn bundle for $75. For $75 you’ll get the game, a steelbook case and a collectible Dovahkiin Mask.

Bethesda’s confirmed a Skyrim Special Edition console. If you enter the contest you could win a special Xbox One S or PlayStation 4 Pro.

To celebrate launch week, RT + Follow for a chance to win a #SpecialEditionConsole (custom Xbox One S or PlayStation 4 Pro) pic.twitter.com/BRHqhdYFWf

As for the game’s size on PS4 and Xbox One, it’s pretty big. Here’s what you’re looking at in North America and Europe.

The Skyrim Special Edition release date won’t arrive this summer. Instead, it lands just ahead of the holidays. 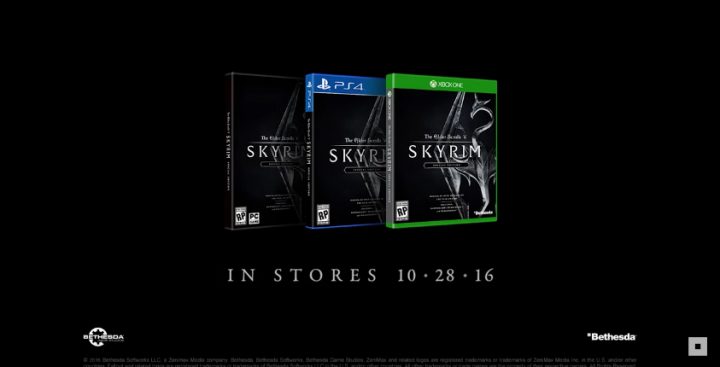 The release date is confirmed for October 28th on Xbox One, PS4 and PC. A release date for the Nintendo Switch is unclear.

As for the Skyrim Special Edition release time, it’ll deploy at 8PM Eastern for PC and midnight Eastern for the Xbox One and PlayStation 4.

Those of you on the west coast of the United States will be able to start playing the digital version of the game starting at 5PM Pacific on October 27th.

Here is the full rundown of the Skyrim Special Edition release time for PC, Xbox One, and PlayStation 4. Pre-loading has already begun for some and it will open up to everyone next week.

Skyrim Special Edition will be available to purchase at its global release time of 12am UTC on Friday, October 28. Here are the unlock times for specific regions:

Xbox One and PlayStation 4

Skyrim Special Edition will unlock for Xbox One and PS4 at 12am local time throughout European territories, midnight Eastern for North American players, and 2pm in Japan. The links below provide some resources for those looking to pre-order.

If you plan on picking up a physical copy, note that retailers like Best Buy will be hosting midnight launch events to accommodate your needs.

If you’re hesitant to commit to the game, note that Skyrim Special Edition reviews probably won’t be out until after its release date on October 28th.

Bethesda says that it will continue its policy “of sending media review copies one day before release.”

The reason? The company wants “everyone, including those in the media, to experience our games at the same time.”

Those of you on the fence will probably want to wait a few days, maybe longer, for feedback about the game to emerge.

Bethesda’s Skyrim Special Edition will come with a fresh coat of paint for Xbox One, Windows PC, and PlayStation 4. 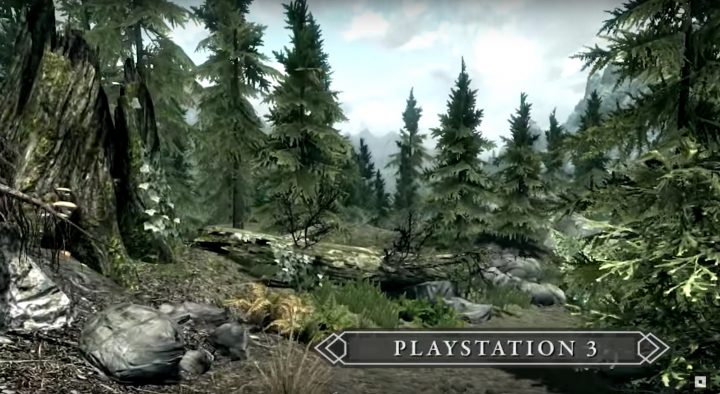 The trailers up top give you a good look at some of these changes in action and the screenshots here show you the difference between the PlayStation 3 version of Skyrim and the remastered version on the PlayStation 4.

Needless to say, it looks much better on the current-generation console. 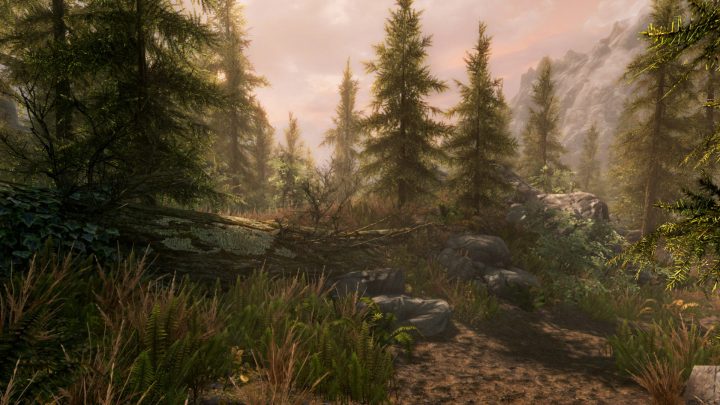 Three things that won’t be in the game? A new UI, new content, and VR content. You’ll see the same quests, characters, and items.

The company says there won’t be any VR content available for Skyrim Special Edition, at least not at the beginning. Bethesda appears to be focused on the Fallout 4 VR release which is set to arrive on HTC Vive sometime next year.

Skyrim Special Edition for PS4 and Xbox One will cost a full $60. Fortunately, if you don’t want to pay the full $60, you won’t have to. 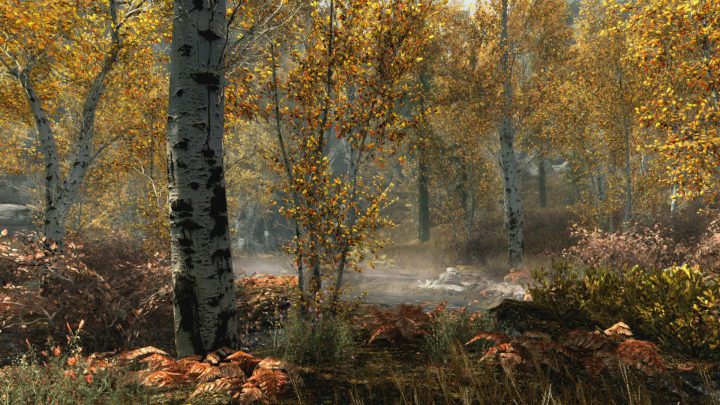 Amazon will cut the price for its Amazon Prime members down to $47.99. And yes, this deal will be available to those who using a trial Amazon Prime account.

Best Buy will also offer 20% off for Gamers Club Unlocked members and Green Man Gaming will almost certainly offer a voucher for the PC version of Skyrim Special Edition.

Keep an eye out for additional deals as we make our way toward the Skyrim Special Edition release date in late October.

Skyrim Mods for PS4 & Xbox One 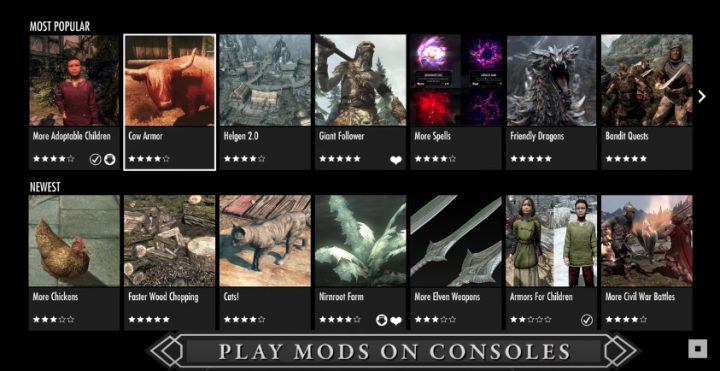 Earlier this year Bethesda pushed Fallout 4 mods for Xbox One. The company also planned to push out PS4 Fallout 4 mods though they were delayed and nearly cancelled. Fortunately, Bethesda and Sony have been able to work things out and Skyrim mods will be available for the PS4 when the game launches on October 28th.

In a recent announcement, Bethesda confirmed plans to bring Skyrim mods to PS4 . That’s obviously a huge change of events and excellent news for those looking to get the most out of Skyrim Special Edition on PS4. Skyrim mods will work on both the regular PS4 and the PS4 Pro.

you can use mods that use everything that comes in the game and dlc. You can't add or change art, audio, etc

Unfortunately, developers “will not be able to upload external assets with” PS4 Skyrim mods. Developers will, however, be “able to use any assets that come with the game.”

This will limit what developers can do with PS4 Skyrim mods because nothing new can be added to the game. 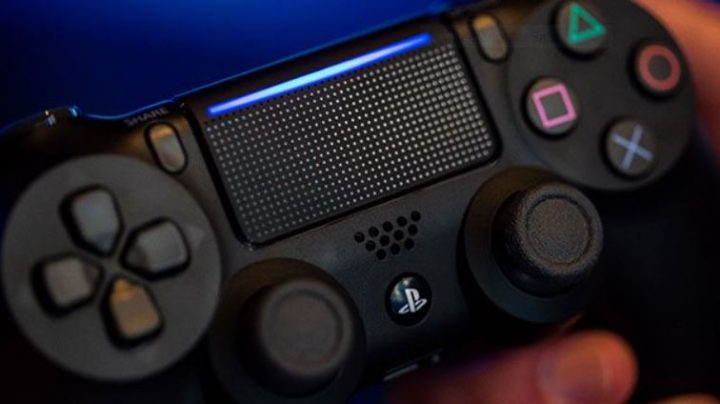 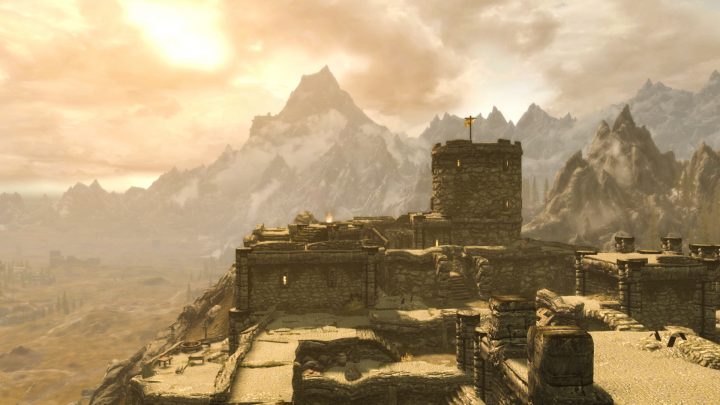 Skyrim mod developers will need to run their mods through a brand new creation kit in order for them to work with the new game. Mods running at 32-bit will need to be changed to be compatible with the game as its 64-bit.

At least some Skyrim mods for Xbox One and PS4 should be available to download on release day though don’t expect to see thousands sprout up immediately. We’ve already seen some mods emerge but the list is a short one.

worth noting that mods that don't use external assets take up significantly less space.

As for Skyrim mods size, Bethesda notes that mods will reserve 5 GB on the Xbox One and 1GB on the PlayStation 4. Which, of course, is a huge difference.

In the meantime, check out our Skyrim mods wish for Xbox One and PS4 in the list below. These are some of our favorite Skyrim mods for PC.