Bethesda’s released the first Skyrim Switch update and this guide will take you through the changes and some of the problems plaguing the game out of the gate.

Skyrim’s finally arrived for the Nintendo Switch which means thousands of Switch owners can now explore Winterhold, Whiterun, and the game’s other iconic locations. Either on the TV or on-the-go.

The game’s getting good reviews from critics and gamers alike, but Skyrim on Switch is far from perfect. Problems are plaguing early adopters and they include graphical issues, missing perks, and various other bugs. Fortunately, Bethesda isn’t sitting on its hands.

While updates for Skyrim Special Edition have stalled, the developer’s released a Skyrim Switch update that fixes some initial headaches and adds some new features.

The Skyrim Switch 1.1 update is an impressive patch and those dealing with sound issues and problems with Legend of Zelda themed items should install it right away.

When you go to install the Skyrim on the Switch you’re looking at a fairly substantial installation. The minimum space required to install Skyrim for Switch to the device’s internal system storage is 14.5 GB. Skyrim takes up 14.3 GB on a Switch game cart.

You’ll also need to make room for the Skyrim Switch 1.1 update. The first patch is more than just a bug fixer. It brings some exciting features as well.

The 1.1 update delivers Traditional Chinese Language Support (Text/Subtitles) and it also comes with support for video capture using the capture button on the Switch. This allows you to capture up to 30 seconds of video.

Video recording is widely available on other platforms, but many Nintendo Switch games don’t support the feature so it’s nice to see Bethesda add support right out of the gates.

The developer’s first Skyrim Switch update also fixes a rare audio issue where static can be heard after fast traveling and an issue with Legend of Zelda themed items not aligning properly on placed weapon racks in player homes. 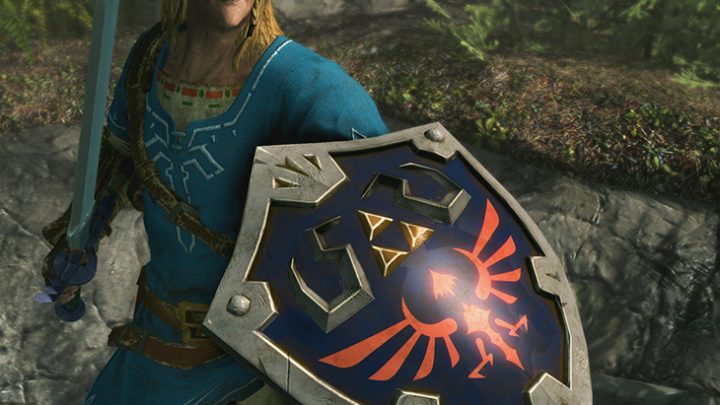 Skyrim for Switch comes with exclusive Legend of Zelda content.

The 1.1 patch also fixes several issues with the Switch’s Motion Controls. The company’s outlined those fixes in detail on its Skyrim Switch forums and they include a fix for an issue where you could get stuck after trying to perform a power attack with the left Joy-Con while on horseback.

Bethesda’s first patch fixes some issues, but bugs and problems linger and will continue to linger as we push away from the game’s release date.

Some users are reporting issues with the game’s perks which is obviously a huge problem for those looking to level up their character.

We’ve also heard about crashes, various amounts of lag, quest issues, and vanishing NPCs and enemies. These are all common problems in Bethesda’s games.

We expect the company to tackle some of the more glaring issues, but issues with quests and graphics could stick around for awhile.

We’ve put together a list of fixes for the most common Skyrim problems and they’re worth a look if and when you run into trouble.